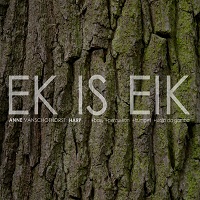 Dutch harpist Anne Vanschothorst is pretty clear about her omnivorous attitude toward composition. Her interest is using the harp to provide texture as well and harmony and melody to her compositions. She excels as a solo performer and one in concert with other instruments, for example, her opening composition "Where's Mo?" is a tacit duet with trumpeter Saskia Laroo, who plays muted and closely miked (not unlike Miles Davis to whom she is compared). The two produce a moody scene where Laroo's muted brass perfumes Vanschothorst's air conditioned-cool underpinnings with a mixture of unfiltered cigarette smoke and lavender.

The harp makes for an interesting anchor. In a jazz neighborhood, it is like a strange combination of vibraphone, guitar and piano. As such, it easily replaces the piano as the harmony instrument in the carefully considered duets inhabiting this collection. Ek is Eik (I am Oak) is structured approximating an imperfect palindrome based on format. The disc opens and closes with Laroo's trumpet, the coda, "And the Willow Tree Smiled" taking a hard left from the impressionistic muted improvisation to a minimalistic open- bell performance of delicacy and beauty.

Continuing inward are two solo pieces by Vanschothorst, "Wandering" and "The Caged Owl," The former possessing the anxiety and grace of Schumann while the latter is Lisztian by way of John Cage, dissonant and disconcerting. Perhaps Vanschothorst's most successful pairing (and most inspired) with gambaist Ernst Stolz, whose viola da gamba approximates a tightly-focused cello. The title piece is a gossamer conversation that sometimes meets and other times passes itself. "Raven's Departure" again opts for a touch of minimalism in the harp figures with Stolz full throated throughout. "Let Her Go" is a plaintively laid landscape with both harp and viola da gamba resonating together.

There is a stunning soundtrack quality to Vanschothorst's music, but that should be no surprise as she has been called upon to provide such to the visual arts. The fun and gift of this music is the imagination of what life scene this music would accompany and enhance. Something like "Songs Without Words" but rather "Scenes Without Stories." It is up to the listener to complete the experience.

Where’s Mo?; Wandering; EK is EIK; When We Were Trees; Here Once Stood Elms; Let Her Go; I Know My Way; Strange Bird; Raven’s Departure; The Caged Owl; And the Willow Tree Smiled.