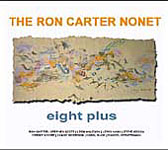 With Stardust (Blue Note 37813, 2002) bassist Ron Carter produced a tasteful collection of standards as a tribute to Oscar Pettiford, impeccably conceived and performed. It was a safe affair where creative risk was minimal. Not so on Eight Plus. Here, Carter employs his trusty piccolo bass and a quartet of cellos. That alone should be strange enough. However, recent recordings have delivered a spate of trombone jazz orchestras, so why not a cello jazz orchestra? Additionally, Carter is more out front as the leader than on any bassist-led project in recent memory. The pieces are generally lengthy, ranging from an iconoclastic two-minute "A Closer Walk With Thee" to Carter’s "Little Waltz" chiming in at just under ten minutes.

The music sounds like hip chamber music. The cellos are not so much plush in their effect as they are percussive and rhythmic. They do provide a dense fullness to the music. The added depth is very effective, particularly on Leon Russell’s "A Song for You." "A Blues for Bradley," composed for Bradley Cunningham, the owner of Bradley’s in New York, is a swinging affair with Carter’s solo as stark as a Hubert Sumerlin solo. This disc is an acquired taste, but like fine Scotch whiskey, it's a taste that is more than worth developing.

Eight; A Blues for Bradley; Little Waltz; O.K.; A Song For You; First Trip; El Rompe Cabeza; A Closer Walk With Thee.