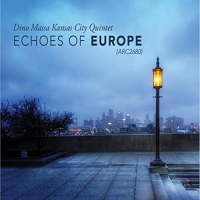 While conversations about the military tend to roam widely, touching on everything from peacekeeping to warmongering, rarely do they touchdown on the topic of cultural exchange. But that's not to say the military doesn't foster such a thing. American troops stationed abroad have always managed to interact with the local population(s), imparting and taking away knowledge in the process, and cross-pollination often materializes through such meetings. Those types of exchanges have helped to build bridges, create lifelong friendships, and birth beautiful art. Echoes Of Europe is proof.

Back in 1990, multi-reedist Christopher Burnett was stationed in Naples, Italy, wearing multiple musical hats with the NATO Big Band and the Ceremonial Band attached to the Commander in Chief of the Allied Forces in Southern Europe. His official duties had him conducting, arranging, and/or playing music for official government functions, but he also managed to find time to work his way into the local jazz scene. That's how he met pianist Dino Massa. The two became friends during Burnett's stay in Naples, gigging together on a good number of occasions, and they proved to be a simpatico pair.

Burnett and Massa eventually went on separate paths, but they reconnected years later through Facebook. That's when they started to think about rekindling their playing partnership. It all came to fruition in 2015, when Massa flew into Kansas City to connect with Burnett. They did several gigs together during that visit, and everything went swimmingly. That inspired Massa to make plans for another trip, which took place in April of 2016 and yielded this recording.

Echoes Of Europe focuses on Massa's writing—five of the seven numbers are from the pianist's pen, one belongs to Burnett, and the last comes from Marcus Hampton, who adds his flugelhorn to a pair of tracks here. It's billed as a quintet date, but it's really something different, as guests come and go throughout. Each performance offers different colors and concepts, but they're all of a piece with the surrounding material. The driven and dynamically controlled "Alone" opens the album, leaving plenty of space for blowing while establishing something of a baseline sound; "Echoes Of Europe" projects an evocative melody through Burnett's horn before ceding solo space to four of the five core band members; Hampton's "Imagine" carries lighthearted Brazilian connotations in its DNA, as cheery flutes, tranquil flugelhorn, and buoyant rhythms meet; and "Notos" paints a harmonically intriguing picture that draws its sound and spirit from Burnett's remembrances of the south winds from Africa sweeping into Naples and ushering in spring.

Massa's emotions strongly influence all of the material, but most noticeably so on the last three tracks. "Paris" opens as a romance for piano, welcoming Burnett's alto and Stanton Kessler's flugelhorn for further starry-eyed reflections before the band proper amiably enters; "Remembering" moves atop a straight time groove and embeds nostalgia in its core; and "Tarantella" balances reflection and urgency, highlighting more of Burnett's sensitive-cum-steadfast alto work and putting forward one of guitarist Charles Gatschet's most absorbing solos on the album. All of this music fondly looks back to those nights of playing in 1990 while speaking to us in the present day. Those echoes from Europe are reverberating here and now.