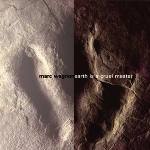 It took multi-instrumentalist Mark Wagnon an entire year to record and mix Earth is a Cruel Master, an engaging collection of original jazz-rock grooves with whirlwind melodic themes and robust improvisations. Known primarily as a vibraphonist, the New York-based Wagnon also plays drums, marimba, keyboards and various percussion instruments throughout the recording. Aided by guitarist Van Manakas, electric bassist Leo Traversa and, on a couple of tunes, upright bassist Danny Stone, the disc has the raw sound of a live band with the benefit of overdubbing and electronic embellishment.

Wagnon's compositions utilize a layering of complementary themes, incorporating the instrumentation at hand, mainly guitar and vibraphone, but at times bass and even drum set with vibrant backbeats that take on a melodic flair. As with much of the so-called fusion genre, Wagnon's music eschews traditional song forms in favor of compositions consisting of various sections, sometimes connected to one another as with the opening "Echo Star" and sometimes seemingly unconnected as with the almost danceable "Embarquement."

There's an exciting element of unpredictability throughout the recording with no one piece sounding alike. The deep-groove of the atmospheric "Osiris Pre-science," which gradually unfolds into an explosive medium for Wagnon and Manakas to improvise over, sits like a distinctly flavored course among the soulful, odd-metered funk of "Dark Matters" and the anxious intensity of "Backsheesh."

The loop-based, world music vibe of "Eye of the Skies: a Farewell" and the heavy-handed 6/8 pulse of "Light at the End" give Wagnon an opportunity to showcase his staggering technique on the vibes. His solos lines are fluid and full of fresh ideas. Equally impressive as a soloist is Manakas who creates an exuberant noise on the closing track "Selective Memories."

Earth is a Cruel Master is a first-rate release of creative, forward-thinking composing supported by spectacular musicianship.