By Glenn Astarita
January 2, 2010
Sign in to view read count 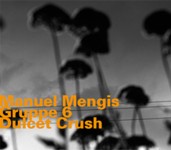 With his third group-led album for hatOLOGY, trumpeter Manuel Mengis projects multiple vistas within a progressive-jazz framework, spanning fusion, jazz-rock and experimental aspirations. Yet the key aspect lies with his ability to design a distinct band-centric stylization, as each subsequent release yields an extension of previously exercised routes. Mengis also abides by a polytonal outlook, resplendent with assertively orchestrated guitar, horns and rhythmic contrasts.

There's a lot going on under the proverbial hood, where Mengis and the dual sax attack raise quite a bit of cane in spots. Electric guitarist Flo Stoffner adds a rough-hewn edge, due to his gravelly chord voicings amid sparks of grunge and progressive-rock shaded frameworks. The band jumps into climactic and sinewy theme-building regimens, capped off by Mengis' golden-toned phrasings and the rhythm section's buoyant pulses.

On "Bling Bling Cowboy," the musicians dish out a quasi ballad atop a straight-four rock groove, yet the tide shifts as Mengis and saxophonists Reto Suhner and Roland von Flue engage in stately choruses via contrapuntal maneuvers. But they raise the temperature on the largely stinging "Sustain The Gain," featuring elements of angst, avant-rock and elongated jazz motifs, to complement a massive free-form meltdown. Moving forward, the hornists execute darting and cascading storylines on the complex funk driven vibe, heard during "The Opposite Of Spring."

This crew doesn't forsake melody, consequently, it's an exposé that offers an intimate portraiture of how tight workmanship and gruff explosiveness coalesce. Add a few soft spots along the way to complement the artists' steamy connotations and bursting outbreaks. Mengis delivers the TKO once again, throughout the sum of these intricately moving parts.

Plant Life; End Of A Record Breaker; Bling Bling Cowboy; Luscious Delirium; Sustain The Gain; The Opposite Of Spring; How Mario Tut Tut Got Super Wow Wow; We Come In Peace.