By WOODROW WILKINS
September 14, 2008
Sign in to view read count 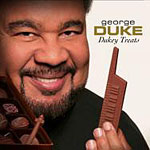 George Duke is one of those artists who defy easy description. A keyboardist, vocalist, composer and producer, he may turn up anywhere. At various stages of his career, he's been a bandleader, a sideman and manager of his own label, BPM (Big Piano Music).

Duke's associations on the stage or in the studio cover various genres: pop, funk, blues, jazz, smooth jazz, etc. He was a member of Julian "Cannonball" Adderley's band, collaborated with Stanley Clarke, and has worked with Kirk Whalum, Rick Braun, Fourplay, Larry Carlton and many others. Duke even had a recurring role as a piano bar owner in the short-lived soap opera, Generations.

Now, Duke is back with his conventional sound; or unconventional, depending on how you look at it. Dukey Treats is at once a throwback to Duke's days as a funk-jazz master and a step forward into something altogether different.

A ballad, "I Tried to Tell You," features more of Duke's dexterity on the keys, as well as his vocal lead. Michael "Patches" Stewart's soft trumpet helps underscore the lead, along with the rest of the horns. Guitarist Jef Lee Johnson's middle solo is an elegant reminder of the signature Isley Brothers sound.

With the small ensemble of Vinnie Colaiuta on drums, Lenny Castro on percussion, Jubu on guitar and Corine Duke offering "shush," Duke vents with "Somebody Laid It On Us," a funky social anthem. Again showing his dexterity on keys, Duke questions why some in society think it is acceptable to fight, steal, rob or hurt other people. "Somebody laid it on us, told us that there's only one way, that we are right and they are wrong, and we must make them pay," Duke sings.

Duke revisits "Creepin,'" one of the more delightful songs from his popular Face the Music (BPM, 2002). With several members of that recording, including bassist Christian McBride and drummer Little John Roberts, Duke and the gang deliver a haunting tribute to those who sneak around on their lovers.

Throughout Dukey Treats, Duke is accompanied by an ever-changing supporting cast. Each contributes wonderfully, although the limited use of Rachell Ferrell seems wasteful. That is the only disappointment of this album. And that all twelve songs are written by Duke is refreshing in a time when many artists are doing covers.

Everyday Hero; I Tried to Tell You; A Fonk Tail; Dukey Treats; Listen Baby; Mercy; Somebody Laid It On Us; Creepin'; (ghoulie remix); Right on Time; Sudan; Are You Ready; Images of Us.