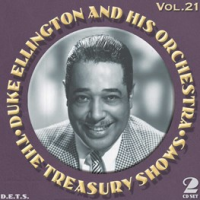 This volume of the Duke Ellington Treasury Shows commemorates the death on July 20 1946 of Joe "Tricky Sam" Nanton, one of the founding fathers of the band's early "jungle" sound that helped make its name at the Cotton Club. Nanton was the first musician to die with Ellington and the leader—a highly superstitious man—took it as a bad omen.

As indeed it was, heralding an end to stable line-ups and an extended period of "musical chairs" as sidemen came and went, though -as always -Ellington triumphed in adversity.

Still, Nanton was a great loss. Ellington hired his unique "growl" trombone in 1926. Trumpeter Rex Stewart paid a warm tribute to him: "What a variety of sounds he evoked from his instrument! From the wail of a new-born baby to the raucous hoot of an owl, from the bloodcurdling scream of an enraged tiger to the eerie cooing of a mourning dove. Tricky had them all in his bag of tricks and he utilized them with thoughtful discretion and good taste."

Most notably, he was a part of the Ellington trio that created "Mood Indigo," the others members being Barney Bigard and Artie Whetsol.

On the first disk, recorded live at the Million Dollar Theatre, Los Angeles, on July 6, 1946, Nanton's plunger mute is heard as an integral part of the Ellington sound; witness an ebullient version of "Ko-Ko." On the second, recorded at the Orpheum Theatre, San Diego, just 21 days later, that sound has gone forever.

Nanton died from a stroke, aged just 42. On the second disk, Ellington dedicates a medley of tunes in his honour and in "A Gathering In A Clearing" trumpet high note specialist Cat Anderson comes back down to earth to demonstrate plunger mute techniques learned from Nanton.

Otherwise, Duke fluffs his lines with great aplomb promoting government "peace" bonds while Al Hibbler at one point doesn't seem to know whether he should be cryin' or laughin' on "Laughin' On The Outside" and opts for an embarrassed silence instead. Such moments are like the flaws in certain postage stamps that render them priceless for collectors.

Sound quality is excellent and MC idiocy minimal. All in all, a great, particularly heartfelt and human Treasury Show release—be sure not to miss it. And there's an All About Jazz bonus for Ellington fans in a video attached to this review. A few months after these two Treasury Shows were recorded, the orchestra accompanies Django Reinhardt, the phenomenal French guitarist making his US debut.

CD1: Take The A Train; Caravan; Sono; Laughin’ On The Outside; The Blues; Teardrops In The Rain; I’m Just A Lucky So And So; Metronome All Out; Just A-Sittin’ And A-Rockin’; One O’Clock Jump; Things Ain’t What They Used To Be; Ko-Ko. CD2: Take The A Train; Jump For Joy; A Gathering In A Clearing; Come Rain Or Come Shine; Suddenly It Jumped; Medley – Black And Tan Fantasy, In A Sentimental Mood, Mood Indigo, I’m Beginning To See The Light, Sophisticated Lady, Caravan, Solitude, I Let A Song Go Out Of My Heart, Don’t Get Around Much Anymore; Passion Flower; Just You, Just Me; You Don’t Love Me No More; Unbooted Character; Cotton Tail; Swing Shifters Swing; Altitude (Main Stem).