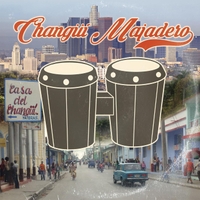 The traditional changüí musical style originated in the eastern side of Cuba, specifically the Baracoa section of Guantanamo Province. It was developed by the fusion of Spanish guitar melodies with African derived rhythms, and is the foundation for the Cuban son, which led directly to guaguanco, and salsa. Changüí Majadero is an adventurous ensemble which is reintroducing changüí to a new generation on El Changüí Majadero; taking it from Cuba to California and adding their own blend of syncopated flavors.

This group was formed as a labor of love by Gabriel Garcia, who plays the Cuban tres (three sets of strings—tuned to same pitch) and sings. After Garcia became infatuated by the infectious changüí sound, he traveled to Guantanamo to learn firsthand from the masters how to replicate the distinctive melodic nuances on the tres. Bassist Yosmel Montejo is a native Cuban, so he has the innate sense of channeling the harmony which hold the arrangements together. Vocalist Norell Thompson, is Puerto Rican, and experienced in the proper phrasing and emotions required to sing changüí. The band is rounded out by the Ortiz brothers, Alfred on maracas and vocals, and George on the bongos.

"Me La Llevo Al Megoton," displays the characteristic emphasis on the downbeat, the tempo driven by the maracas and bongos, and by the scratchy guayo, supplied by Eddy Ortiz. Thompson shines on the vocals which lead to a call and response section typical of most changüí songs. There is a cross reference to Santeria in the lyrics of "Mayumbero," and "Nengon," is the precursor to changüí, the beat played in straight quarter notes, for a throwback African tempo.

The campesino (country) music influence highlights "Soy Campesino," and "Digno De Lastima," a humorous story of a man who deserves pity and compassion due to his concurring plights and situations. Folk tales offer an essential backdrop for lyrics, and "Pastora De Guararey," recalls the venerable matriarch Pastora whose daughter was romantically involved with a married man, who drew her ire (guararey); this song was covered in salsa's heyday by Ray Barretto, and is revisited here with great zest and fervor.

Rumba is where the drummers get to dominate the interplay, and bongocero George Ortiz mixes it up with Garcia on "La Rumba Esta Buena," with Thompson doing some great sonera singing. Shedding light on the 2014 Mexican mass student disappearance, "Changüí Pa' Ayotzinapa," articulates that infamous incident which remains an open case and mystery. Martha Gonzalez is a local East LA vocalist, and she is featured on "Amor De Madre," an inspiring tribute to the unequalled status of a mothers love.

It is exhilarating to discover a band who has recaptured a historical style, and brought it into the modern era. Though changüí has always maintained its relevance and importance, it was certainly due a shot of revivalism. Changüí Majadero has maintained the established format of bongos, bass and tres, augmented by the maracas/guayo percussive definition, centered on the singer's ability to invoke the proper sentiments. This is joyous music, deserving greater recognition.