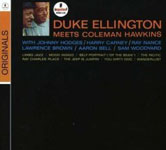 This extraordinary 1962 session was the realization of a promise made thirty years earlier between the maestro, Duke Ellington, and the father of the tenor saxophone, Coleman Hawkins, that they would some day make a record together. Released a mere two months ahead of the largely iconic Ellington-Coltrane meeting, the earlier date is distinguished by the creative energies and commitment both men bring to the proceedings, with Ellington producing a scaled-down version of one of his best bands and Hawkins playing like his characteristically authoritative self while becoming an integral member of the ensemble (in effect, he replaces tenor saxophonist Paul Gonsalves).

There are two considerations with the disc. Musically, it offers the compositional genius of Ellington and inspired solo work by his principals—altoist Johnny Hodges, cornetist Ray Nance, and trombonist Lawrence Brown. On the opening, inviting calypso rhythms of "Limbo Jazz," energized by the vocalizations of drummer Sam Woodyard, Hawkins seems all but forgotten until he slyly joins the party with a short but definitive closing solo. On "The Jeep Is Jumping" he's a more visible clean-up hitter, following the felicitous statements of the other tonal personalities with a masterful, extended sermon that leaves no doubt about who's the guest of honor. He double-times "You Dirty Dog" and sweetly converses with Ray Nance's fiddle on "The Ricitic."

"Mood Indigo" and "Self-Portrait" are all Hawkins, with the former, especially, capturing the delicate textures of Ellington's orchestral palette thanks to exceptional mixing by engineer Rudy Van Gelder. The Latin-tinged "Ray Charles Place" soon yields to an up-tempo shuffle rhythm on which the principals again shine, Hawkins' tenor ultimately chasing away any remaining clouds. The broad back-beat of "Wanderlust" suits Hodges, the underrated Nance, and baritone saxophonist Harry Carney to a tee, with Brown's trombone once again threatening to take solo honors before Hawkins' sensual entrance and building, climactic solo.

But this reissue raises serious extra-musical questions. The original company, Impulse, was primarily associated with late Coltrane and the avant-garde, so the first reissue of this date in 1995 saw Universal, the conglomerate with rights to the Impulse name, releasing the date under another of its labels—GRP. The latter, however, was primarily associated with new-age, or "contemporary jazz," sounds, so for this 2007 reissue Universal has replayed its musical shell game, releasing it under the more traditional Verve label. Moreover, the present edition, besides raising the price, omits the preceding reissue's bonus track ("Solitude"), foregoes new liner notes and, worse, prints the old ones in a microscopic, fuzzy, illegible font.

Obviously, record companies—at least the "Big 4"—are unwilling to spend an extra dollar or hour on a domestic reissue when it's far more cost-effective to induce consumers to download individual tracks or the album. Since the earlier, 1995 edition of this priceless session is still available, the reader is left to draw his own conclusion about the better value.