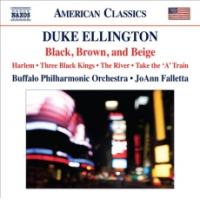 These orchestral pieces, all extended compositions, leave little wonder where came the inspiration to keeper-of-the-flame Wynton Marsalis' longer works like the Pulitzer Prize- winning Blood on the Fields (Sony 1997) and Vitoria Suite (Emarcy, 2010). These works are intended as stage pieces, either as ballets or older forms. "Harlem," also titled "A Tone Parallel to Harlem"—a tone poem in the most romantic sense—bears the mark of Ellington's most assertive brass writing, a thread passing through all of his compositions. Ellington wants to convey from where he came. Muted trumpets and trombones establish a street conversation that evolves into a fractured swing, reflecting a jazz story. "Harlem" can be heard as an American soundtrack, big and brash with much to say in reflecting the extroverted personality of the New York City hamlet.

"Black, Brown, and Beige" is fully a suite in three parts, depicting three aspect of African-American life: "Black," acknowledging faith and hard work; "Brown," acknowledging African-Americans who served in the Civil War; and "Beige," a homage to the Harlem Renaissance. The suite is emotive and clearly wrought with lows accentuated in the deep reeds and highs in the bright gleam of brass. The ballet "Three Black Kings" was the last piece scored by Ellington before his passing, and left to be completed by Ellington's son, Mercer Ellington, after the composer's death. It pays tribute to three significant "Kings," Martin Luther King being the last. The MLK section is a slow swing flow not unlike a jazz rendering of Beethoven's allegretto from the classical composer's "Seventh Symphony." It is definitely a dance piece.

The disc closes with a full-throated, fully orchestrated and Re-harmonized "Take the 'A' Train," featuring a well-behaved trumpet solo by Tony Di Lorenzo, a percolating alto saxophone solo by Sal Andolina and an almost down-home violin solo by Amy Licata. The piece is freshly presented with few efforts to make it jazz (save the solos) and every effort to show it as a concert piece. Sonically, the Buffalo Philharmonic is captured a bit distantly on this disc, giving the recording very much a concert hall feel. Falletta dispatches her Ellington well, making the music smile through the orchestra in the same way the conductor has done so for the music of George Gershwin, Aaron Copland and John Corigliano.