By Ernest Barteldes
November 12, 2006
Sign in to view read count 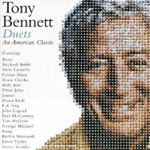 Tony Bennett, a Queens-born singer, celebrates his 80th with his voice sounding as great as it has been for years; on Duets, he revisits some of his classics with a group of friends and admirers.

Some of the guest appearances on these tracks are not really surprising, like Barbra Streisand's on "Smile." Celine Dion is one of those singers who suffers from bad choices in her own repertoire, but when given the opportunity to tackle a great song, she does it with gusto, as on "If I Ruled The World."

The surprises come through performers who do not usually take on this kind of music. You barely recognize Paul McCartney's voice on "The Very Thought Of You." He just gives himself entirely to the song, shedding his pop sensibilities to perform the tune. Bassist Richard Bona has mentioned John Legend's incredible talent (Legend did a guest spot on Bona's recently released Decca CD, Tiki), but I was not ready for this—Legend almost steals the song away from Bennett. Juanes also makes a stellar turn on a bilingual version of "The Shadow of Your Smile."

George Michael has seen a considerable turn in his fortunes in recent years, which is quite a contrast from his superstardom during the '90s. At last year's Live 8 Festival, he was relegated to singing harmony vocals with Paul McCartney, and his career has been marred by tabloid scrutiny of his private life. We are reminded that Michael is a great singer in his own right on "How Do You Keep The Music Playing?" This is not the first time he has taken on jazz songs. A couple of years ago he released and album of standards, and he made "Desafinado" a hit again with his 1996 duet with Astrud Gilberto.

Hank Williams' "Cold, Cold Heart," a crossover country hit for Bennett, has since been remade by several artists. He revisits the tune with Tim McGraw, who sounds incredibly comfortable without his country-rock electric apparatus.

Bono appeared on Frank Sinatra's 1993 Duets album, and he appears here on "I Wanna Be Around." While he sounded like a rocker doing standards on his performance with Sinatra, this time he sounds more subdued and is able to better explore his vocal range. Sting sings beautifully on "Boulevard of Broken Dreams," and Stevie Wonder revisits "For Once In My Life," delivering a beautiful rendition (reportedly in one take).

The incredible thing about this record is that Bennett actually sang with his guests by his side—something that's become quite unusual in the era of MP3s and telephone linkups. You can feel the rapport in the studio—Bennett encourages James Taylor during "Put on a Happy Face," reacts emotionally to Stevie Wonder's improvisations, and flirts playfully with Streisand. This was possibly motivated by his own contribution to Sinatra's album, which was done from a distance. An American Classic is a wonderful album, and it sounds great even after repeated spins.

Lullaby of Broadway; Smile; Put on a Happy Face; The Very Thought of You; The Shadow of Your Smile; Rags to Riches; The Good Life; Cold, Cold Heart; If I Ruled the World; The Best Is Yet to Come; For Once in My Life; Are You Havin' Any Fun; Because of You; The Boulevard of Broken Dreams; I Wanna Be Around; Sing, You Sinners; I Left My Heart in San Francisco; How Do You Keep the Music Playing?