By Budd Kopman
October 1, 2016
Sign in to view read count 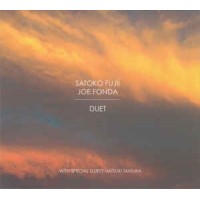 The story behind the creation of the miraculous album, Duet by pianist Satoko Fujii and bassist Joe Fonda is one of those things that makes one a believer in karma.

Although both have played with reed man Gebhard Ullmann in various configurations, Fujii and Fonda had never met, and had not heard much, if any, of each other's music. Now, this might seem strange since both are acknowledged leaders of free/avant-garde jazz, and both have powerful musical personalities and immediately recognizable sounds. However, that such highly creative and directed musicians, closely focused on their own playing, composing and touring, had never met is almost natural, despite knowing each other by reputation.

The meeting ended up happening because of a suggestion made to Fonda that he should listen to Fujii's music and would then want to play with her. Fujii's music made a deep impression on Fonda, and he contacted her. For her part, Fujii was surprised to hear from Fonda and they managed to get together on November 14, 2015 at the Buttonwood Tree Performing Arts & Cultural Center, in Middletown, Connecticut for the 10th Annual Jazz CT Composers and Improvisers Festival.

This recording was made the next night in Portland, Maine at the Woodfords Congregational Chapel for the Dimensions in Jazz Series run by Paul Lichter. The superb quality of the sound is immediately evident—the piano sings and the bass is woody and fully focused; you are there.

The music created de novo is reminiscent of an earlier Fujii encounter with Carla Kihlstedt, recorded as Minamo. It is just as intense and just as amazingly organic in its development. Fujii spoke of how she and Kihlstedt connected, and in that mysterious manner of supreme improvisors, create coherent music with no preparation; the same happens here with Fonda. In the former, Kihlstedt floats above Fujii, while here Fonda bubbles below her.

Fonda is an extremely powerful player, and from a good playback system, will almost knock you over. He is quite used to playing in loose co-operative groups, but, in recordings at least, not so much in such a completely free and exposed venue, which could be said to be Fujii's forte. In any case, Fonda matches Fujii as far as being a "force of nature" and pushes as much as he is pulled. The energy flowing between them is palpable, exciting and occasionally almost unbearable.

The only quibble is that there is "only" just under forty-nine minutes of music presented in two tracks, the first over three times as long as the second. Perhaps the rest of the music will appear someday.

The first track is a bravura performance that features many of the musical mannerisms that will be familiar to those who follow Fujii and Fonda. The duo produces astonishing musical textures that arise out of the mists. They engage in what sounds like joyous battle at times, only to swerve in a flash to produce ethereal sounds that float in mid-air.

The audience is silent, and must have been holding its collective breath. At the end of thirty-seven continuous minutes of intense concentration, the condensed atmosphere virtually melts as everyone murmurs in amazement at what had just taken place.

The second track, taken from the second set, includes Fujii's husband and musical partner, trumpeter/sound-maker Natsuki Tamura, and so naturally the textures produced are different. As might be expected, Fujii and Tamura know each other extremely well, but Fonda is definitely not a third wheel, and indeed, matches Tamura's virtuosic sound production when playing the flute in the last third of the track.

Duet is a perfect example of the paradox that is Creative Improvised Music in that the recording captures and seals in amber a spontaneous musical happening which can never, ever occur again. Those familiar with this genre will revel in its easy virtuosity and deep musical spirituality; for those unfamiliar, both Duet and Minamo are phenomenal performances.