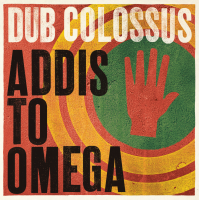 If you're a sucker for BIG horn sections, or something like the sounds of UB40 and Groove Armada, still have a 'lickle ting' for Bob Marley and Finley Quaye records and your Pops obsession with Two-Tone (as do we all surely), then you're probably going to like Addis to Omega from Dub Colossus produced by Dubulah aka Nick Page. An album of skatalitic reggae dub delights, all sepia tinged in Studio One nostalgia with some heavy nods to Ethio jazz. This is music for pimped out sound systems, rolled down windows, sounds to make a city sing this summer and grandpop's ears burn.

Gwan, gwan, gwan—it's said that this is the new era of rude boys and girls, a time to dress sharp and look dapper—with tunes to boot. These are new beats to nod those noggins, and in the words of Dub Colossus get "Mashin' up the sterea."

Addis to Omega is music for a long journey —to the festival, at the festival and back from the festival. It just feels good. One of those albums you wish you'd found yourself...all warm and nicely mixed up, like a relaxing, cool summer drink. The title track is an anthemic-uniting-BIG-tune, which defies anyone with a pulse not to feel good, as does the end track.

All the voices (mostly PJ Higgins and Dubulah) are warm and harmonizing, fit the beats and heavy bass sweetly and make a person want to enjoy the sunshine right now. These guys have the ingredients for an amazing outdoor gig—there's an archivist's mix of Studio One reflections, big echoing B3 organ and some seriously classy brass peppered generously across the whole album courtesy of Horns of Negus (and trombonist Harry Brown—his name's on the Adele album "21," and Jerry Dammers' Spatial A.K.A. Orchestra).

"Keep on Rocking" has an emotional guitar solo that gets you there (hand on chest), the organ solos are skatalitic and regardless of whether a listener puffs the Dutchie or not, the selection of tunes is wholesome. Tracks like "The Casino's Burning Down" and "Madmen" would make The Specials smile as much as Bob Marley, Sun Ra or Mulatu Astatke.

There's something hauntingly "Nature Boy" about "Tale of Two Cities," all good instrumental arrangements throughout that keep the groove hooked. "The Shape of Things To Come" is a faith union song— East meets West -bows to each other and plays a tune together, with a mesmerizing violin solo by Samy Bishal and a hypnotic vocal by Natacha Atlas.

No two tunes are alike, there's something unique every track on Addis to Omega with some fun surprises. For the ardent jazz fans, ok this isn't chopstick waving music, but hair down please, the Sun's out and sometimes even vamps get tired of nightclubs. Gwan play some Dub Colossus and hydrate with a cool libation.

Boom Ka Boom (and the Dub Disciples); Family Man; The Casino Burning Down; We Are The Playthings Of The Rich; Fight Back; Addis to Omega (Amnesis Remix); Keep on Rocking; Soft Power; Madmen; Mi Dad; Tale Of Two Cities; The Shape Of Things To Come; Happy Face; A Voice Has Power; Orpheus Underground.