BY GLENN ASTARITA
August 20, 2008
Sign in to view read count 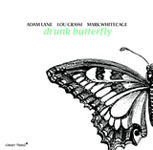 Connotations of a Drunk Butterfly might sound like a humorous proposition, especially when depicted in a cartoon. But art doesn't necessarily imitate art within this 2008 trio release. Sure, the trio embarks upon a few off-kilter flight patterns. However, the musical aspects present numerous examples steeped within the bop, or free-bop scheme of things. And with three highly revered New York area artists spinning a web of excitement, the music and overall effect convey a democratic engagement that occasionally projects a spiraling trajectory.

Rising-star bassist/composer Adam Lane and veteran drummer Lou Grassi establish a fluent musical bed for alto saxophonist/clarinetist Mark Whitecage, where the trio transparently merges modern mainstream with free expression. In effect, everyone gets his or her day in the sun throughout this irrefutably buoyant jamboree. Listen to Whitecage's bopping and bouncy clarinet lines on the medium-tempo cooker titled "Chichi Rides the Tiger," which is a theme that sports a sublime, underlying melody. Yet Lane tosses a surprise into this vibrant piece by turning the tide via his frantic, bowed-bass passages that elicit gobs of tension and an air of uncertainty. To that end, the musicians convey more than just a few, aggressively initiated deviations.

Ever the accelerant and agitator, Grassi generates a fervent backbone on the predominance of these up-tempo works. While Lane leverages this rhythmic component with élan and fervor. In various regions of this album, Whitecage integrates North African modalities and staggered swing vamps to contrast his lithely engineered solo spots. Hence, the band covers a lot of musical ground by tempering the various flows and using depth as an asset.

It's partly about controlled firepower coupled with the artists shrewd injections of dynamics that helps keep this train rolling. Each track provides a distinct flavor amid several thought-provoking musical propositions, as the trio astutely balances highly complex improvisational exercises with many conventional implications.