By FRIEDRICH KUNZMANN
February 5, 2019
Sign in to view read count 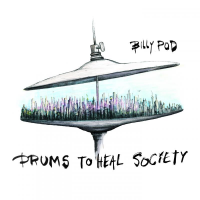 Athens-based drummer Vassilis Podaras, going by the name of Billy Pod, has been an active musician on the contemporary Greek jazz scene for over ten years and now decides it's the right time to record and release his debut album Drums To Heal Society. With the exception of Feist's "Limit To Your Love," all of the pieces are self-penned and demonstrate a musician who is both a versatile composer and a subtle drummer with an ear for melody.

After opening the album with crashing cymbals and trembling snare-rolls, "Minor Mystery" represents the first exhibition of the elegant melodic phrases which are combined with rhythmic intensity and run through the album like a thread. Guitarist Michalis Tsiftsis is able to switch between reserved leads and extravagant solo passages with elegance, while Rhodesman Yiannis Papadopoulos designs the harmonic frames with lower frequency clusters. "L." follows suit and once again points the spotlight to the guitar while the subsequent "One Heart" displays a more holistic approach of the ensemble, with newly invigorated double bass lines, played by Kimon Karoutzos, jumping to the playful soundscapes that Jannis Anastasakis throws into the mix.

In addition to inviting the soulful and dark-colored voice of Katerine Duska on stage for an insightful cover of "Limit To Your Love"—the only vocal track on the record—Billy Pod proves that he can't get enough of his instrument and is joined by drummer Stephanos Chytiris for the experimental sound-collage that is the title track (though the title of the album alone surely proves in what regard he holds the drums).

Contrary to what one might expect from a still quite young drummer, and an album titled in reference to his own instrument, Drums To Heal Society exposes a dynamic musician who plays to serve his compositions in the best possible way. Billy Pod's sense for melodic immediacy combined with a musical vision that is mindful of every voice makes for a promising debut album.