BY JIM SANTELLA
September 29, 2005
Sign in to view read count 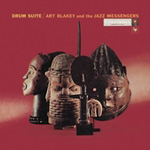 The all-star lineup on Drum Suite gives the album high marks before one note of music is played. It's a piece of history. Released in 1957, the album merged Art Blakey's Jazz Messengers with several other musical forces that proved fruitful, rhythmically and otherwise.

With this reissue come several bonus tracks that had appeared on Originally in 1981, one alternate take, and a full version of "The Sacrifice" that wasn't previously issued. The original liner notes from Drum Suite are included, as well as updated notes by Kenny Washington and a booklet with fourteen photos of the artists.

As a leader, Blakey gave the world soulful hard bop jazz to remember. "Nica's Tempo," for example, begins with his drum solo and transitions into a beautiful up-tempo drive that remains propelled by sparks of "electricity." There was always a vibrant force behind his projects.

"D's Dilemma" feature's Blakey's cascading snare drum pitches, and he applies pressure to the head accordingly. Donald Byrd and Ira Sullivan give "L'il" a light, driving force that showcases Blakey's use of varied textures in order to communicate his ideas. Their cohesive interplay results in a supple hard bop interpretation that overflows with excitement. Both takes of "The New Message" flow with soulful impressions and a light, rhythmic zeal. Blakey's positive outlook always shone through, as he led by example and brought out the best in everyone who served in his army of jazz volunteers.