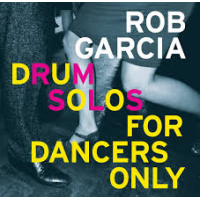 There's more than enough artistry, craftsmanship and ingenuity in Rob Garcia's Drum Solos For Dancers Only to please the sedentary jazz aficionado. Although the thirteen tracks are intended to spur bodies in motion, his drumming merits scrutiny on purely musical terms. For the most part Garcia executes swinging rhythms much like the ones that drove the popular big bands of the 1930s and 40s and wraps them in themes that include symmetrical, easily recognizable song forms. Some of his compositions bear a strong resemblance to the tunes of yore—for instance, "Savoy Steps" sounds remarkably like Edgar Sampson's iconic "Stompin' At The Savoy." Garcia's articulate sticking, ability to introduce and juxtapose a variety of textures, scrupulous attention to dynamics and rousing, coherent improvisations makes these traditional templates sound vital in the present-day.

One of the pleasures of Garcia's musicianship is the clarity of every stroke, regardless of the tempo, velocity or dynamic level. His hands and feet work together in concert to produce layered, logical heads and improvisations. Sticking and brushwork isn't inflexible, ham-handed or flamboyant. There's an admirable balance between every component of his drum kit. The mounted and floor tom-toms, in particular, sound animated and harmonious. Often used to supplement a phrase as well as frequently struck four beats per bar, Garcia's bass drum is always under control and mindful of what his hands are doing, thus ensuring that the pulse doesn't turn into a mindless stomp. Rim shots, as well as strokes to the rims and a cowbell aren't employed as novelty items or used to excess; rather, they're thoughtfully integrated into the overall presentation.

In part, "Savoy Steps" entails basic, melody-like phrases executed between the snare and tom-toms and seasoned by brief closed rolls and buzz strokes. On "Bay Sea Plank" Garcia creates sensual movement by means of a combination of ringing tom-toms, brief strokes to the snare, and punchy hits to the bass drum, while playing sizzling straight time on the hi-hat. The head of "Balboa Cavern" includes bounding tom-toms closely tied to a brief snare drum retort. "Honey Soft Shoe," perhaps the disc's most propulsive track, features an array of snapping single brush strokes and rubs on the drum head at a variety of dynamic levels as well as moments in which Garcia makes the brushes sound like the shuffling of a deck of cards. Snare and rim shot combinations during portions of "Swing In The Corner" produce an edgy, biting sound that's combined with brief strokes to the tom-toms, and eventually evolves into a brief marriage of hits to the rims and cowbell.

Drum Solos For Dancers Only is neither an exercise in swing era nostalgia nor a bold leap into the future of jazz. By ably fusing recognizable designs, brilliant execution and real passion for playing, Garcia's golden mean constitutes a mature, accomplished recital and occupies a rightful place in today's crowded jazz arena.