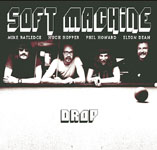 For Soft Machine fans, Drop may well be the Holy Grail of live recordings from a legendary British group that began in psychedelia, ended in riff-based fusion, and traversed considerable stylistic territory in between. A four-month tenure might be nothing more than a footnote to some, but Phil Howard contributes to one of the group's greatest triumphs—electric, ear-shattering free improvisation of more reckless abandon than anything before, or after, the Australian drummer's brief stay.

Keyboardist Mike Ratledge may have written some of the group's most complex compositions, but he was an equally powerful improviser, as the incendiary solos on his mid-tempo "Slightly All the Time" and higher velocity title track demonstrate. Bassist Hugh Hopper was also interested in composition—albeit of a more oblique nature—but here he proves capable of both anchoring this liberated incarnation and responding to Howard's rhythmic maelstrom on Dean's "Neo Caliban Grides" and Ratledge's melodically episodic "Pigling Bland." Dean's free improv proclivities were already well-known—surfacing more vividly on the sessions for his debut, Just Us (Cuneiform, 1972)—but he was still a melodist at heart, as focused in construction as he was visceral in intensity. His fiery saxello solo on "Slightly All the Time" is, quite simply, one of his best on record.

Howard was already playing with Dean in early 1971 (he can also be heard on Just Us), and his unrestrained and unconstrained approach—resembling Tony Williams' fierceness but more unfettered in its view of time—created a perfect foil. When founding member Robert Wyatt left Soft Machine in August 1971, Dean suggested Howard as the ideal replacement. Howard may not have ultimately proven ideal—driving the band so far away from form was simply too much for Ratledge and Hopper at the time, resulting in the drummer's termination mid-way through the Fifth sessions—but more than lighting a fire, Howard dropped a nuclear bomb on the group, pushing it to some of its greatest and most transcendent extremes.

Soft Machine's live performances were always continuous; here it finds new ways to segue from one tune to the next in an hour-long set of unrelenting creativity. Howard's turbulence blurs some of the arrangements as he pushes his way through some of the more challenging constructs rather than playing with them, but he possesses a pulse all his own—his own kind of swing.

Any doubts that Soft Machine was on equal footing with its American counterparts of the time can finally be put to rest once and for all with the spontaneous combustion of Drop. Too late for 2008 "best of" lists, it's the first clear entry for best historical release of 2009.