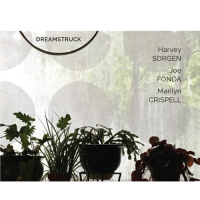 For the most part, the three musicians eschew formality in favor of spontaneous compositions that emphasize inventive contributions. But included in the mix are two Fonda originals ("My Song" and "Read This"), the title piece "Dreamstruck" (composed by Bob Windbiel) and the delightful "Kalypso" (composed by the late great drummer Paul Motian). This helps to explain the variety of moods set forth in the music, moods that evoke early morning skies of gray and blue and late afternoon sunsets of orange and yellow.

On many of the numbers, the trio gently feels its way along the outlines of the composition, as one might when uncertain of footing in a dark and unfamiliar room. Take for example the long foggy notes of Fonda's bowing in "My Song" and the way the piece comes to a conclusion which does not end but simply dangles on a string. Or Sorgen's all-over drumming on "Portrait," "Read This," or "Our Own Tea Leaves," the sheer virtuosity of it, while remaining in the background for most of the album, only rising with flourishes that are interjected between musical phrases. Or Crispell's broad and narrow piano attacks and phrases, sounding at times like Cecil Taylor (on "Area 52") and at other times like Keith Jarrett (on "Kalypso"), but mostly like herself—lyrical and bluesy abstractions interlaced with ruminating free flourishes.

To work across such a broad spectrum of moods and color, the musicians must hone their art by listening and responding. This album demonstrates collaboration at its finest. Standout pieces include the free form "Area 52," the lyrical "Dreamstruck," the soft azure tone poem "Both Sides Of The Ocean," and the joyous "Kalypso."

One hopes that this trio works together again in the future (and soon). Until then, listeners will have to satisfy their cravings with Dreamstruck and the imaginative offerings contained therein. Enjoy!

My Song; Portrait; Landscape; Our Own Tea Leaves; Dreamstruck; Read This; Area 52; Both Sides Of The Ocean; On Bellagio; Kaylpso.