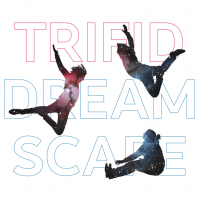 A muse may come in the form of faith, love, or a woman with little or plenty of both, but it can hardly be argued that an artist of any discipline requires one. In their debut recording, Dutch/Polish trio named TRIFID have taken to the stars for theirs. Sticking firmly with an astrological theme, they take their name from a nebula visible in the Milky Way. Comprising the group are accordionist Rik Cornellison, vibraphonist Vincent Houdijk, and bassist Maciej Domaradszki. The trio is also joined by trumpeter Teus Nobel and violinist Oene Van Geel on three tracks each, one of which they share.

Dreamscape was recorded live at the Beauforthuis in Austerlitz in November 2017. The set list for that evening included ten songs penned entirely by Cornellison and Houdijk. After the album's opener, also named "Trifid," the band moves through a few slower tunes with outer-space themed titles before landing on the centerpiece track, "Moonshine Song." Here they expand to a full quartet, having Nobel open with a muted trumpet before deferring to Oene van Geel's first outstanding violin solo of the night.

"Dreamscape Of The Subconsciousness" is a beautifully written piece by Cornellison. Nobel swaps his trumpet for a smoother- sounding flugelhorn, filling the song with a deep, almost personal contemplation.

Houdijk would go on to record "UY Scuti" for his 2018 release Live At The North Sea Jazz Festival, relying on a very precise rhythmic interplay between his quintet to craft one of the album's standout pieces; a year earlier, it featured as Dreamscape's penultimate song. This more pared down version begins with Domaradszki's deep double bass plucking over the growling bass register of Cornellison's accordion, which continues for a full three minutes before submitting to van Geel's deceptively charming violin. Once Houdijk takes the reigns of his composition, it comes to a boiling point, foreshadowing the frantic masterpiece it would later become.

Concluding their recording (and that evening's set) is the simply titled "Earth." A composition by Cornellison, it's notable not only for the moodiness he tempers the tune with, but the unexpected effect van Geel has as he lends not only his instrument, but also his voice. While it is startling in that none of the group had rehearsed it this way before, the inclusion of vocals adds a distinctly human touch to a song dedicated to our planet.

Keen-eared listeners may recognize Vincent Houdijk from his contemporaneous project, VinnieVibes. Though more restrained here, he genuinely seems on the cusp of something great, a pivotal creative output which puts his name in the hat of international recognition.

Dreamscape's title certainly suits the album, as the theme holding its songs together acts like some sort of extraterrestrial glue, creating a heavily, ethereal atmosphere. The accordion, vibraphone, and double bass are a trio about as rare as Halley's Comet, and arouse an equal amount of curiosity.