BY JOHN KELMAN
December 3, 2007
Sign in to view read count 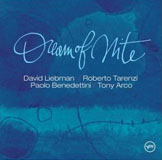 All too often, an artist's recordings don't come anywhere close to representing his/her full scope. American artists often tour Europe with groups worthy of being heard but rarely documented—and if they are, it's on obscure labels almost never seeing the light of day Stateside. Saxophonist Dave Liebman has occasionally worked with this fine trio of Italian musicians over the past few years, making Dream of Nite not just good news for documenting this quartet from a series of 2005 live performances, but even better news that it's receiving major label distribution in North America.

While Liebman and his longstanding American group continued to forge ahead with its remarkable exploration of the depth and breadth of the blues on Blues All Ways (OmniTone, 2007), Dream of Nite is a decidedly more mainstream affair. Still, the emphasis is on original material, with the exception of a gently swinging take on Miles Davis' "Fran-Dance."

Straight-ahead it may be, but the energy and invention that have defined Liebman's work over the past four decades are immediately apparent from the opening notes of pianist Roberto Tarenzi's Latin-esque modal workout, "Unsteady." One of two tracks featuring Liebman on tenor (the other being his own knotty title track, a nod to the cerebral writing of Wayne Shorter), it's a complex chart that takes little time getting to the heart of the matter—Liebman's visceral and Tarenzi's more gradually built solos, both bolstered by bassist Paolo Benedettini and drummer Tony Arco's powerfully responsive support.

Liebman has long been considered the torch-bearer for John Coltrane's unfettered expressionism, especially on soprano sax—for which Liebman is a rarity in that it's more often than not his primary axe rather than a doubling instrument. The intrepid spirit of Coltrane looms large, but Liebman's always had his own distinctive voice, possessing a warmer, less nasally tone on soprano and, while certainly capable of approaching Coltrane's "sheets of sound," more attentive to the importance of space and breath. His extended solo on Antonio Arcodia's sixteen minute "Feel" demonstrates a rare ability to be endlessly inventive over the long haul, with ears remaining wide open and an uncanny ability to bring near-vocal expressiveness to his instrument.

Liebman may only work with this trio on occasion, but it's clear they've spent considerably more time together, especially on the "time, no changes" of Tarenzi's "En Noir," where the communication is less direct, but deeply felt throughout. Benedettini's solo at the top of Liebman's dark ballad, "Tomorrow's Expectations," hints at the equally spare treatment given by all, with Liebman delivering his most lyrical solo of the set and Tarenzi demonstrating a harmonic richness reminiscent of British pianist John Taylor.

Dream of Nite is the kind of record, featuring a well-known American artist with lesser-known Europeans, that should see North American release, but rarely does, especially from a major label like Verve. With an album this good, let's hope there are more to come.