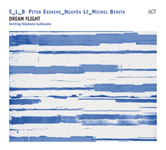 Active leaders all—and busy sidemen as well—drummer Peter Erskine, guitarist Nguyên Lê and bassist Michel Benita worked together in other contexts, prior to forming the collective trio E_L_B and releasing their self-titled 2000 ACT debut. Busy schedules prevented a follow-up for seven years; but following a successful tour where the trio became a quartet with the addition of impressive up-and-coming saxophonist Stéphane Guillaume, Dream Flight retains all that made E_L_B such a compelling listen, while demonstrating the growth one would hope to hear in the intervening years.

Despite the demonstrable talent of his early years, Erskine experienced a watershed mark in the early 1990s, when his earlier, chops-laden work morphed into an approach more attuned to the essence of the material. His own projects have simplified to the point of diametric opposition to much of his early work. Here, he strikes a more equitable balance, kicking seriously funky butt on Lê's "Jive Five," which briefly quotes the late bassist Jaco Pastorius' "Teen Town." Still, Erskine's attention to the needs of the song remains, transcending superfluous excess and integrating more seamlessly with his band mates.

Pastorius gets another nod on Erskine's "Song for Jaco," where Benita takes the lead—though, on acoustic bass, it's a much different complexion. Still, this tender ballad not only references the late bassist's melodic elegance, but Erskine's ability to compose profoundly beautiful music. Guillaume's tenor solo is poignantly spare, while Lê combines touching lyricism, distinctive technique and an unerring ability to choose the right tonality for every occasion.

It remains an oddity that Lê is considered by most to be a fusion guitarist (not that there's anything wrong with that), when he's proved himself capable of far more. Erskine's "Twelve," done in a "time no changes" style and revived from Juni (1999)—his final ECM trio disc with pianist John Taylor and bassist Palle Danielsson—provides a far freer context for Lê to bend the rules, with a brief but gently swinging solo combining occidental harmony and oriental microtonality.

Still, despite some of Dream Flight's subtler nuances, there's no shortage of energy and just plain kicking it. Lê's irregularly metered "Kokopanitsa" is quirky piece of funk with a set of staggering changes surpassed only by Lê's knotty, high-velocity theme, and a solo that combines in-your-face virtuosity with visceral bends and a distinctive use of the whammy bar. Benita's title track is more ethereal, a feature for Lê's expansive textural playing, with a greasy groove and singable melody that set the stage for an early highlight: Lê's electrifying and gradually intensifying solo—supported, pushed and prodded by Erskine and Benita.

The addition of Guillaume gives Dream Flight greater breadth, but it's the chemistry shared by Erksine, Lê and Benita that drives the disc. Sometimes it's not necessary to play together on a regular basis. Sometimes, lessons learned in other situations—and brought to occasional reunions—make a collective of already proven potential all the stronger still.