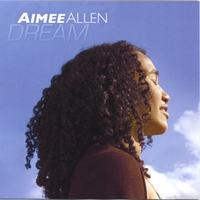 Aimee Allen's debut album provides a generous helping of eleven tunes from the Great American Songbook. The artist, who possesses a bright voice with a good range, takes the opportunity to mix in some bossa nova, as well as the French lyric for "Autumn Leaves," including the rarely heard verse.

While still a student at Yale University, Allen took an active interest in performing with two a cappella groups which specialized in a jazz repetoire. After her graduation, she lived and performed regularly in Paris. The singer's interest in both French music and bossa nova led to the formation of Les Bossa Novices.

Allen shows a fine ability to communicate with a ballad, which she does on the Ellington/Strayhorn classic "Daydream" and Arthur Hamilton's "Cry Me A River," where she's effectively accompanied by guitarist Richard Padron. The other members of her ensemble include pianists Dave Cook or Toru Dodo, bassist Ben Campbell and drummer Brian Woodruff.

Allen's a real affinity for the music of Brazil comes through on her two ventures into the genre (Luis Bonfa's "Manha de Carneval/Black Orpheus" and Jobim's "Triste" are the high points of the album). What was most surprising to me was the addition of an original, "Solitude Blues," where she seems to lighten up a bit, perhaps because she feels more comfortable in that setting.