BY WOODROW WILKINS
August 3, 2008
Sign in to view read count 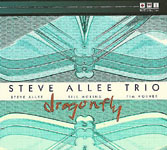 Music is a listening experience, but sometimes it can create a vivid, visual image. So it is with "Bus to Belmopan," the opening track to Steve Allee Trio's Dragonfly. Its engaging Latin beat creates an instrumental story about an interesting bus trip to the capital city of Belize.

Pianist/composer Steve Allee is a fixture on the Indianapolis scene. Inspired by pianist Erroll Grandy among others, Allee is a veteran with more than 35 years of musical experience. Working mostly in jazz, he writes, has performed for syndicated radio programs, network television and motion pictures and is also a music educator.

"Bus to Belmopan" starts with the piano, complemented by drummer Tim Horner and bassist Bill Moring. Tenor saxophonist Rich Perry shares the lead when the journey moves forward and, after some crisp cymbal work by Horner, takes off on a playful solo.

Horner's hi-hat helps set the mood for the title song. This ambient piece features Allee, with Moring mostly in the background. Though the mood is very different from "Bus to Belmopan," "Dragonfly" also conjures visuals of travel. Moring does step up with a bass solo after the song shifts cruising speed into more of a stroll, but things heat up when Allee, Moring and Horner kick it back into high gear.

Perry comes back with the delicious "Yummy," a free-spirited jazz/blues track. This is one of the more enjoyable pieces because it represents what music should be about: expression. Giving the impression that the four musicians are just having fun, it's feel-good music from start to finish. Allee's piano solo helps drive that message home, aided by Moring and Horner. Moring gets a little slap-bass action going, underscored by piano and drums.

Though most of the songs are Allee originals, the ensemble covers the Bernstein/Sondheim classic "Somewhere," as well as compositions by Frank Loesser, and Coldplay. "If I Were a Bell" ends a three-song dedication suite, with the trio honoring some of Allee's heroes: Bill Evans, Thad Jones and Oscar Peterson, with alto saxophonist Rob Dixon stepping in for the closing number, "Hip Factor." It all comes together to make Dragonfly a fine collection.