By Douglas Payne
February 1, 1998
Sign in to view read count 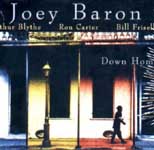 Befitting its title, Down Home is a surprisingly soulful set by four pros who live up to their promising intrigue as an all-star quartet. Arthur Blythe, Bill Frisell, Ron Carter and leader Baron combine forces and the result is not what you'd expect. Such a quartet may suggest a hip trip through the downtown avant-garde, with Carter, whose playing has tended more toward classical these days, something of an afterthought. But all four have exceptional musical versatility, so any preconceptions are unwise.

Smart and sassy soul is what's on the menu here. There's the gut-bucket R&B of old Prestige records ("Mighty Fine"), the Meters beat of "Wide Load" (featuring a gem of a Carter solo), the James Brown funk of "What" (with the funkiest Frisell solo ever) and the lively bar band blues of "The Crock Pot" (showcasing Baron himself).

The tunes, all Baron originals, seem to pay homage to the other players as well; especially Baron's former boss, Frisell. There's the Frisell-like ballad of "Little Boy," the all-too brief guitar-bass duo of "Listen To The Woman" (which, surprisingly, suggests Gabor Szabo) and "Supposing," a short recollection of Jerry Granelli's A Song I Thought I Heard Buddy Sing (another Frisell project). "Aren't We All" is prototypical Arthur Blythe. And "Wide Load" is reminiscent of Carter's CTI days.

The spotlight, however, shines on Blythe and Frisell. Blythe—whose style is never less than distinctively his own—strikes a balance somewhere between David Sanborn and Hank Crawford in these environs. And Frisell, who sticks to his electric guitar throughout (no synth), is outstanding; giving at least two solos ("Mighty Fine" and "Wide Load") that are worth the price of admission.

Unfortunately, I'm not familiar with Baron's previous solo work with unusual trios like Baron Down. But anyone who's seen Baron in performance (with Frisell or John Zorn) knows the drummer likes to have fun when he plays. Here, the listener joins the joyride too. Down Home, despite its brief 45-minute running time is, indeed, mighty fine; a hearty menu with plenty of meaty playing.

Mighty Fine, Little Boy, Wide Load, The Crock Pot, What, Listen To The Woman, Aren't We All, Supposing.