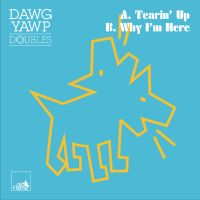 Cincinnati's folk-rock duo Dawg Yawp is rolling out their new music in a series of two-song singles that they are calling "Doubles." (And why did nobody think of that bit of marketing genius in the heyday of the 45?)

Their first such set shows a nice progression from their 2016 self-titled full-length release, as well as their 2015 EP "Two Hearted." Wholly consistent with their earlier work, the two tracks on "Doubles, Vol. 1" also exhibit new sides to their music, new depth. Not merely leftovers from "Dawg Yawp," these two songs are clearly the first entries in the next chapter of the band's development.

The opening track, "Tearin' Up" is encased in a shimmering retro pop sensibility a la Matthew Sweet that marks it as a departure from their earlier, rootsier world-beat influenced sound. But it retains the gorgeous two-part vocal harmonies from their previous releases, harmonies that recalled such legendary duos as Seals & Crofts and Cecilio & Kapono. The plaintive love song is built around a lovely theme, and is nearly perfectly paced—slowly building to a satisfying release. Tyler Randall's sitar punctuates Rob Keenan's guitar, adding a piquancy that keeps it from getting too sweet.

"Why I'm Here" starts off in a similar vein, before heading into a more playful direction as it incorporates presidential candidate Howard Dean's exuberant 2004 Iowa caucus concession speech, which is sampled in all its original CNN glory. The track's a bit edgier than "Tearin' Up," with other sound effects woven into the track's second half. To be honest, some of the effects kind of distract from what is another winsome melody—it frankly seems a bit of an attempt to be edgy for edgy's sake.

It's a fun concept, releasing two songs at a time, and fans of the immensely talented duo have much to look forward to as they roll out more in the months to come.

Tearin' Up; Why I'm Here