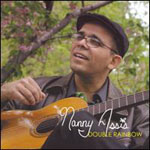 Here's a new release on Blue Toucan Records, a label that has a positive way with Brazilian jazz, and has an impressive roster of artists in this genre. Singer/percussionist/composer Nanny Assis has been on this scene for some sixteen years but this is his first solo album after working with and arranging music for such Brazilian musicians as Eumir Deodato, Vinicius Cantuaria, Arto Lindsey, Leo Gandelman, Helio Alves, Paulo Braga, Romero Lubambo and Nilson Matta, In addition, Assis has worked with American jazz artists including John Patitucci, Jay Leonhart, Jenny Scheinman and Kate McGarry.

Beginning in 1986, Assis was awarded "Best Percussionist" at the Bahia Instrumental Festival and then began working with orchestras. His work was noted quickly so that within a two-year period, Assis began receiving accolades for his musicianship. In 1990 he became the head musician in Bahia's world famous Carnival as singer/percussionist, and in 2000 he was invited to join Cantuaria's world tour.

In preparing the production of Double Rainbow, Assis called upon some old friends like. Deodato, Lubambo, Patitucci, Braga, as well as American jazz cellist Erik Friedlander. Nanny Assis provided arrangements for most of the sixteen tracks. Fittingly named for the composition of Antonio Carlos Jobim, Double Rainbow also uses other tunes by the legendary singer/composer such as "Passarim" and a tune that is closely associated with Jobim, Jamie Silva's "O Pato." Assis offers a wide variety of tunes from Ivan Lins ("Bilhete"), Jorge Ben ("Mas Que Nada"), Seal ("Kiss From A Rose"), and Joao Donato and Caetano Veloso's Afro-Brazilian "A Ra". The irresistible street samba riff from Carlinhos Brown ("Magalenha") was recorded by Sergio Mendes and that version was used in the film Dance With Me. This track by Assis incorporates some Brazilian rap during the instrumental break.

There are also a few originals from Assis and the album ends with a Portuguese version of the title tune, "Chovendo na Roseira," which is much more effective than the opening English language take. Like Jobim, Assis wanders into the Great American Songbook and delivers Charlie Chaplin's "Smile" in Portuguese ("Sorrir"). Assis' vocal technique seems best appreciated on the up-tempo numbers and at those times there is more than a bit of Milton Nascimento's soaring voice present. In terms of generalization, he approximates the style of Jobim on ballads, accompanying himself on guitar. But Assis' forte seems to be the colorations of the arrangements. At the beginning of "Double Rainbow," Erik Friedlander's cello provides counterpoint to his vocal, and the start of "Kiss from a Rose" features a sonorous statement from the cellist that stands out.