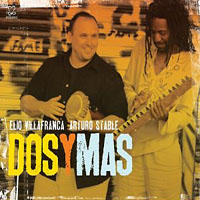 Pianist Elio Villafranca and percussionist Arturo Stable have the world at their fingertips. They originally hail from Cuba, where they received classical training and soaked in the sounds of the people before coming Stateside. But they don't limit their vision to their mutual point of origin. Spain, the Middle East and Africa, along with the sounds of their homeland, come into view on Dos Y Mas as these two meld their minds and marry their musical intentions to create a program of organic, original music.

Both men have traveled parallel paths, spending their formative years at Cuba's Instituto Superior de Arte in Havana, bonding during their time in saxophonist Jane Bunnett's Spirits Of Havana band, paying their dues while establishing themselves as world-class, cutting-edge Cuban jazz artists, and paying it forward through their work as educators in Philadelphia-based college music programs. All of these experiences, whether similar or shared, make them apt partners for this travelogue of a duo date.

Dos Y Mas opens with a pair of odd-metered Villafranca originals, which give the pianist a chance to unwind before laying down a foundational vamp beneath Stable's soloing. The album continues with "Alla," a loose-flowing ballad that proves to be the only track which doesn't have a good sense of flow and balance. Stable's percussion proves to be a bit too busy, as it distracts from and clashes with Villafranca's fluid piano. However, they quickly rebound with "Arara," inspired by Villafranca's encounter with Ojun Degara—"one of the oldest Arara folkloric groups in the province of Matanzas, Cuba."

"Arara" proves to be the start of a real musical winning streak for this dynamic duo: "En La Colonia" opens on a two-minute thumb piano solo and features some hypnotic, left-versus-right rhythms from Villafranca; "Vertiente" hits pay dirt with their blending of Bulería rhythms and Afro-Cuban elements; and they kick things up a notch in the energy department on the spicy "A Las Millas." As the album nears its end, they switch gears with the rushing tides of "Agua Marina" and the vocal-enhanced "Cuba Linda," which brings singer Igor Arias into the equation. These songs help broaden the overall scope of the project.

While a firm understanding of Cuban forms and world rhythms may enhance the overall listening experience, Dos Y Mas doesn't come with any knowledge-based prerequisites. These open-minded musical sculptors created this music for those with open ears to absorb and enjoy it.