By Bruce Lindsay
March 9, 2012
Sign in to view read count 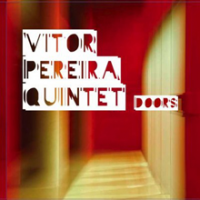 Music produced by London's F-IRE Collective is almost guaranteed to be intriguing and innovative. Doors, the debut from Portuguese guitarist Vitor Pereira's Quintet, is a worthy addition to the Collective's output. The quintet contains some of the UK's finest young players, including alto saxophonist Chris Williams, from Led Bib, and drummer Eddie Hick, from Gilad Atzmon's Orient House Ensemble. Pereira—who composed all of the tunes—favors a pure, warm guitar tone but isn't averse to some occasional heavier chordal playing.

Pereira moved to the UK in 2004, studying at Middlesex University with educators such as Nikki Iles and Mike Outram. He's played with many musicians on the London scene since, but the Quintet is his first recording outfit. It's a great band—Hick and Williams sounding in especially good form—with all five players working well together to bring life to the guitarist's writing.

There are elements of rock guitar, blues, free jazz and post-bop incorporated into Pereira's writing and the band members' playing. "Coffee Break" is a strong opening track. Underpinned by a slinky groove courtesy of Hick and bassist Ryan Trebilcock, it grabs the attention with a solid riff from Pereira's guitar and the twin saxophones of Williams and James Allsopp. "The Machine" has a similar structure, mixing slinky and heavy in almost equal measure.

There's a gentler and more reflective mood on some of Pereira's other compositions, typified by the lovely "Reviravolta" and "Outras Paragens." "Andanças" occupies the middle ground—more urgent, with a little more tension, but without the heavier rock sound of "Coffee Break."

According to Pereira, the album title refers to the sound of the band—a sound that opens doors to a diverse range of influences. Time was when any 'doors' reference in contemporary music seemed to come straight from Aldous Huxley's perceptual openings, so it's nice to see Pereira coming from a slightly different perspective. Doors certainly does benefit from this openness to musical influences, though. Pereira shows himself to be open to a myriad of stylistic inspirations without being overwhelmed by any single one, and the Quintet's debut bodes well for its future.