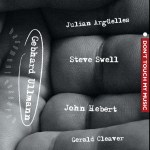 Multi-instrumentalist and composer Gebhard Ullmann lays down the ground rules without ado with the slam-bang title Don't Touch My Music. There should be no qualms about that, Ullmann's music is made to draw rapt attention. The closer one listens, the more there is to discover.

Ullmann brings in an evolving, and revolving, cast of characters to give voice to his music. Each ensemble brings certain attributes and direction to his compositions that absorb various strains to enrich them. Basement Research with Steve Swell, Julian Arguelles, John Hebert, and Gerald Cleaver has marked an indelible presence with their earlier work. And there's no messing around with them this time either.

The members of Basement Research have honed empathy to a fine skill. Surprise is the hallmark of their cross-pollination of genres. The band dons and doffs styles in seamless motion, playing in sweet consonance at one moment and taking off at tangents the next. An intimate conversation warps into disparate strain. And with the wit and sly humor they inject, this CD turns out to be quite the excellent entertainer.

"Don't Touch the Music" is a fine showcase for their creativity. Ullmann brings in the tenor saxophone and blows a myriad of blustery notes. Swell and Argulles lay down calmer lines in tandem leaving Ullmann to his own devices. The melodic theme wisps in and out, the band romps into swing, the horns honk and bop, while the rhythm section lays down a steady beat.

The spirit of New Orleans permeates "Kleine Figuren No. 2" with the sounds of Mardi Gras and a funeral march saturating the melody before they turn on the switch and move into a Latin snap, the samba and uppity swing with the meter and tempo making for infectious bedfellows.

Every track is tantalizing. No matter which way the ear is cocked, the music has vitality, panache, and verve.