Yes, this is a concept album, but it doesn’t hit you over the head with religiosity. 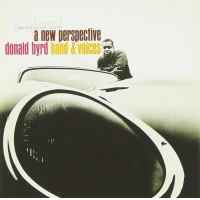 A New Perspective is unlike any jazz album you've heard before—and the change is refreshing.

At first, the choir feels wrong. The very first notes of this 1963 album are voices. They start with a powerful gospel feel, but then quickly change to a more pop-ish, happy-happy 1960s mode. It's jarring and not very jazzy. It feels, at first, like the album might be one of those frozen-in-time creatures that sound old fashioned and saccharine.

But then the band kicks in, and what a band! This is a seven-piece bop combo featuring five very different, very strong soloists: trumpeter and leader Donald Byrd, Hank Mobley on tenor sax, Kenny Burrell on guitar, Herbie Hancock on piano and Donald Best on vibes. Backing them is drummer Lex Humphries and bassist Burch Warren.

A New Perspective has only five songs, but each is 5 to 10 minutes long, and each is soaked in gospel and blues. The titles alone tell you the quasi-religious concept behind the album: "Elijah," "Beast of Burden," "Cristo Redentor," "The Black Disciple" and "Chant."

Yes, this is a concept album, but it doesn't hit you over the head with religiosity. This isn't Christian jazz. Instead, it feels like a precursor to John Coltrane's A Love Supreme—an overwhelmingly spiritual event.

The opener, "Elijah," is unapologetically joyous. "Beast of Burden" is a slow, soulful blues. "Cristo Redentor" feels like a sad, soft hymn—the high point of the CD. "The Black Disciple" has a strong beat and is the most boppish song of the bunch. Finally, the album ends with "Chant," an upbeat tune that feels like the start of a new day, a song that seems to say, "Wake up and be glad you're alive."

The beauty of A New Perspective—aside from the choir and the religious subtext—is in the variety of musical voices in the band. Each soloist feels very different from the other, so the instrumentation never feels old or overused: happy vibes, soulful tenor, bluesy piano, jazzy guitar, emotional trumpet.

Sometimes, Blue Note albums from the 1950s and '60s can feel like the same old bop, with interchangeable lineups and tunes. A New Perspective is truly a new perspective—fresh and original. It's something to hear and to own.

Cost: Just $2 used—how can you beat that?