The style and conception of the recording falls into what could be called 'modern traditionalist,' [but] there are moments here and there that hint at a penchant for more lawlessness 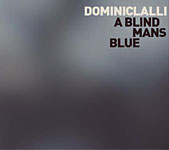 Making a memorable and positive entrance onto the world's jazz stage is a rare achievement—and, percentage-wise, becoming rarer. It takes a high level of commitment, talent, and work; and some good luck never hurt. These days the standard is higher than ever and the sheer volume of hats being thrown into the ring makes it harder to rise above the fray. But come December 2008, tenor saxophonist Dominic Lalli's A Blind Man's Blue will surely stand out as one of the top debuts of the previous twelve months.

But music is not sports. Lalli's voice is a warm mix of lyricism, harmonic density, solid time, and the blues. There's a sweetness and clarity of tone that sings out of his horn even when it's most burning. While it would be easy to favorably compare Lalli to a few big name players, he's already developed his own personal bag of creative musical gestures.

After the first listen through of A Blind Man's Blue there were already a handful of 'Lalli-isms' being enjoyed: the articulation of a punched note at the bottom of a descending run; a backwards turn capping an ascending line; or his way with a bent note on a subtle blues gesture. His energy during solos often comes from a comfortable pocket between laidback and aggressive. He can (and does) do both separately, but the vibe is occasionally a subtle composite.

The style and conception of the recording falls into what could be called 'modern traditionalist.' Lalli's music (6 originals and 3 standards for quartet/quintet) is a mix of 1960s post-bop, modern ballads, and more contemporary mixed meters, ostinatos, and vamps. There are moments here and there that hint at a penchant for more lawlessness in terms of form but for the moment the band is adhering to the rules.

The title track is the recording's strongest. Its melody is relatively simple, direct, and acts as a beacon through odd meters and illusive harmonies which tend toward the dark. Compositionally, the blowing section is essentially a harmonically static groove. With less compositional material to play against, the group digs deeper for ideas, making for some of the recording's more adventurous playing. Instead of restating the melody, Lalli caps the tune with a new vamp for the drummer to blow over and take the tune out. It's a creative addition that keeps the listener and musicians on their toes.

Other notables are the up-tempo standard "Golden Earrings" (including a particularly burning tenor solo) and another Lalli original, "Emerald Isles." The former is one of only two tunes on the record that have a straight-ahead, four to the floor, walking feel. It's definitely the tune most likely to be singled out as the "burner" and the band leans into it. The harmonies and unison trumpet/tenor blend on "Isles" are reminiscent of some mid 1960s Herbie Hancock—splitting the difference between the pianist's funkiest and most abstract music. The melody's long tones float over lush harmonies, anchored by rhythmic bass/piano unison lines, creating a classic, open sound that has wide appeal.

Lalli's arrangement of Victor Feldman's jazz standard "Joshua" is maybe the most challenging. While the form of the original is already relatively involved, Lalli adds a few twists—constantly shifting meters of 7/4, 5/4, and 4/4—creating a metric obstacle course. The band nimbly transforms this maze into a piece that grooves and flows as if there were nothing to be rhythmically concerned about.

But perhaps the most interesting pieces on A Blind Man's Blue—by virtue of their difference—are "Interlude" and "Outerlude." These tunes show a very different aesthetic than the rest of the recording. Lalli uses the recording studio as a writing tool by organizing loops of pre-recorded bits—sometimes in an overtly cut-and-paste fashion—then adding other sounds of his own later. The foundations are unequivocal backbeats and come off as deep hip-hop and pop grooves. Lalli spends a good amount of time working with various groups in other styles and is apparently not, nor should he want to be, immune to musical osmosis. Although a completely different manifestation, it's another sign of the aforementioned penchant for lawlessness. The jazz police will be arriving shortly.

The sidemen are all established players bringing deep understanding and creativity to the music. Trumpet player Greg Gisbert and cornet player Ron Miles provide fine contrast and counterpoint to Lalli's ideas. Gisbert and Miles are both band leaders themselves and are known as extensive collaborators with composer Maria Schneider and guitarist Bill Frisell, respectively.

Collectively they bring a myriad of qualities, including brightness of tone, suffuse colors, introspection and classic hard-bop sensibilities. Having them both present on the recording, though not playing together, seems like a conscious compositional choice. Drummer Rudy Royston is another Frisell collaborator and also plays with tenorist J.D. Allen. Royston brings subtlety and fire to the music and is integral to the recording's success. Whether he's pushing hard on the up-tempo burner or adding color on a ballad, he's always musical and supportive. Former Carmen McRae accompanist pianist Eric Gunnison and Brazilian-born bassist Bijoux Barbosa make a fine string section.

These modern times have created the illusion of an explosion of choices in nearly every direction: politicians, news sources, recording artists, prescription drugs, endless consumer products, etc. But most of these "choices" are the same old letter merely delivered in a new envelope. Dominic Lalli's A Blind Man's Blue is a truly fresh choice in a sea of empty envelopes.