BY EYAL HAREUVENI
February 13, 2008
Sign in to view read count 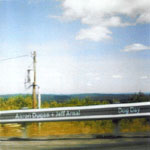 Brooklyn-based guitarist Aaron Dugan, best known as the guitarist of the Hasidic Rap-Reggae Matisyahu, and drummer Jeff Arnal, a former student of Milford Graves and frequent collaborator with trumpeter Nate Wooley and bassist Reuben Radding, have been collaborating since 2003, building a telepathic affinity that enables them to move leisurely between ideas and motives that reference everything from 1960s free jazz, innovative Austrian composer Anton Webern, pop songs and blues to sound experiments à la Sonic Youth .The fourteen brief tracks on their debut recording as a duo, Dog Day represent their versatile and diverse musical interests.

Dugan begins with swift changes of riffs that are responded to immediately by the Arnal 's rolling drumming, locked on a fitting groove, with both retaining the tension and drama. Even on sparer tracks including "Trickum Shoals," "Pisco," "App" and "Allenby" you can sense the intense textures that both can form, without loading them down with too many notes. Rather, they experiment with fresh ideas—improvising on a simple, repeating thorny guitar line; creating eerie sound ambience by bowing the cymbals and stressing the metallic sounds of the drums; and adding atmospheric electronic effects to the guitar.

Dugan and Arnal explode on "Magic Hour," one of the longest tracks, featuring distorted, Hendrix-ian guitar pyrotechnics and dense polyrhythmic drumming. Their tight interplay is always stressed, and the dense "Collision" demonstrate how fast they read each other's moves and push the sonic envelope forward. On "Lisboa," the distant echoing guitar and fractured touches on the drum set offer a tensed cinematic atmosphere, and on "Paz" both are toying with an open-form bluesy scale.

Visit Aaron Dugan and Jeff Arnal on the web.