By Glenn Astarita
December 26, 2016
Sign in to view read count 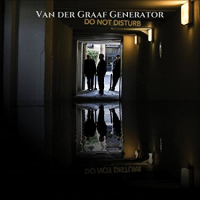 You can't have a serious conversation about the infancy of progressive rock without citing Van der Graff Generator (VdGG) as one of the genre's driving forces amid its influence back in the '70s and beyond. They may not have been as widely known or sold as many records as King Crimson, Yes or Emerson, Lake & Palmer, but VdGG's singular imprint stands tall amongst the upper echelon of bands that sparked a re-imagination of the tried and true, namely conventional rock.

The classic quartet lineup regrouped in 2005 but, following the departure of David Jackson—an integral component of their sound—after a 2006 tour, the remaining members decided to continue without the stylistic saxophonist/flautist. And the trio surges onward, with Peter Hammill's trademark vocalizations, spanning hallowed expressionism, brashly emotive sentiment and sublime melodicism. And, of course, drummer Guy Evans and keyboardist/bassist Hugh Banton consummate the trio's collective DNA. VdGG can also be thought of as a band that propagates "a state of mind," which is a factor that weighs heavily on this outing.

Do Not Disturb purveys a "fine art" sensibility, ingrained with Hammill's melancholic verse and flair for the dramatic, as the band executes forceful and weighty prog motifs while showing restraint via melodic overtones. Toss in some regal choruses and changeable story lines and it stacks up to be a pleasurable listening experience from top to bottom. For example, "Room 1210" is framed on an ostinato keys groove, sparked by Hammill's majestic piano clusters and harmonious vocals alternating with somber connotations. However, "(Oh No! I Must Have Said) Yes" is launched by Banton's jazzy bass lines and Hammill's quirky singing, contrasted by a blustery prog sequence towards closeout.

The plot thickens with the breezy and tuneful ballad "Brought to Book," complete with odd-metered progressions and poignant interludes with a bit of oomph in spots, and is a piece that shifts in and out of various time signatures. Ultimately, it's a strong effort from this time-honored unit that possesses a sound and stylistic component like no other. The musicians transmit a sense of ownership, and haven't lost their touch after all these years.