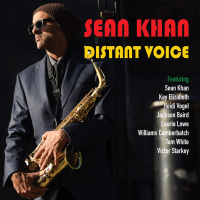 Sean Khan is among the most interesting of British jazz musicians, a prime exponent of jazz as rebel music with a unique voice. And yet, twenty years after he debuted with his band SK Radicals, Khan remains one of the scene's least celebrated players. Khan accurately describes himself as a "career outsider." Like another outsider, fellow saxophonist Steve Williamson, his post-modern, cross-genre aesthetic resists categorisation and means that he remains a niche figure. Though you would never know it from listening to him play, Khan is partly self-taught. Unable to afford his teenage dream of studying at Boston's Berklee School of Music, he applied to London's Guildhall School of Music but was rejected for being "too raw." He did a year and a half at Goldsmiths' College, and then got thrown out. Enough with the institutions, he decided, and finished studying on the bandstand.

Khan's previous album, 2018's Palmares Fantasy (Far Out Recordings), co-starred another singular figure, Hermeto Pascoal. Like its predecessors, it was a blinder, in touch with the jazz tradition while reflecting influences from beyond it and wearing its socio-political heart on its sleeve. Its reception was upstaged a little by the emergence of London's woke jazz, for while Khan shares political attitude and cultural inclusivity with the new scene, he has not been perceived to be part of it.

The four-track EP Distant Voice explores four different genres, connected but distinct. "Feel The Light" is a take on spiritual soul; "The Chaos" builds on the free-your-ass-and-your-mind-will-follow trajectory of George Clinton 's Parliament / Funkadelic; "The Long Goodbye" is a spin on British trip hop; "The Savage Detectives" is free funk going on free jazz. Khan and his band join the threads with characteristic aplomb.

Distant Voice will be followed by a new album of entirely new material, Supreme Love, in early 2020.

Feel The Light; The Chaos; The Long Goodbye; The Savage Detectives.