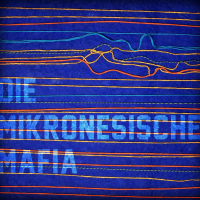 Berlin-based Die Mikronesische Mafia, an event-driven nonet, makes a brand of music that is as backward-looking as it is forward-forging. Cinematic and comprehensive, the five fairly brief parts that make up the group's eponymous release conjure visions of classic movies remade in modern parlance (with thoroughly updated soundtracks) or, even better, Weimar-period cabaret evolved into its futuristic counterpart in the 1982 film Blade Runner, were it set in 2050 Berlin. This odd and oddly affecting music is reminiscent, but of what?

"Part 1" with Moritz Ecker's piquant, framing guitar and Lars Kuklinski's forceful trumpet, are what might wished to be heard in a 22nd Century remake of Sergio Leone's Western film corpus. This is not Hang 'Em High (1968) as musically imagined Dominic Frontiere; this is 1964's A Fist Full of Dollars, featuring some star not yet born and scored by some tunesmith not yet imagined. "Part 2" updates the slow marches of Carl Maria von Weber and, later, Gustav Mahler. Ecker's strummed open chords and mercury-thin single-note playing, backed by a cabaret oompah band, might make the listener understand German white wine and absinthe. The harmonic theme is broad and stately, perhaps framing some post-modern scene of Liebestod, giving tenor saxophonist Axel Knappmeyer his greatest solo space.

"Part 3" is moody and ethereal. A two-chord harmonic path, over which Knappmeyer's flute establishes a bit of peace before Ecker's slide guitar enters and carefully defines the melody, takes it through a cosmic weave of tenor and alto reeds, improvising aggressively. Ecker summons the whole history of the slide guitar, presenting it from start to finish in an explosive coda that is symphonic in scope, slowing to the end. "Part 4" and "Part 5" reincarnates Booker T. and the M.G.s as the house band for the neue Kabarett.

This strange and delightful music is both inventive and accessible and easily one of the finest recordings of the year. It pays to take chances.