By MARK SABBATINI
February 7, 2005
Sign in to view read count 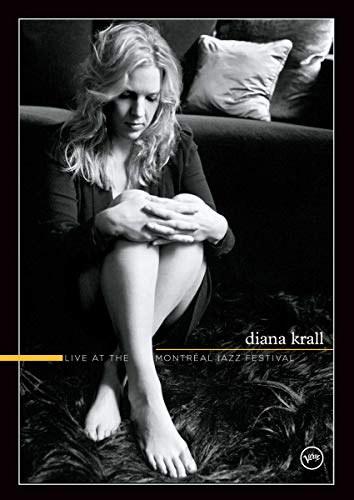 Diana Krall's early career earned widespread acclaim, much of which vanished as her albums became increasingly vacuous mass-market efforts. When 2003's Live In Paris came out, it felt shameful admitting a liking for it and thinking she might be on the rebound.

But that album makes it easier to say the "good"? Krall shows up on the Live At The Montreal Jazz Festival DVD from a June 2004 concert. The first encouraging, if odd, sign: the opening "Sometimes I Just Freak Out"? is dominated by her co-players and she doesn't sing a word.

This lack of being the center of attention, despite the enormous crowd, is a reassuring statement this group is here to perform, not show off. She stays seated at her piano without being overly demonstrative while launching her evenhanded alto vocals on "All Or Nothing At All,"? again letting guitarist Anthony Wilson put one of many impressive runs before her own instrumental solo, making it possible for even skeptics to relax and take the rest of the 90-minute concert at face value.

This isn't a premier or cutting-edge performance, and the video suffers an MTV-like inability to sustain any shot longer than three seconds (14 cameras were used), but ought to be well-received by her fans and rate as at least a pleasingly harmless diversion among more general jazz fans. That's a pretty impressive accomplishment for a musician who's achieved the commercial success Krall has, given the big label pressure that no doubt comes with having one of the few jazz titles occupying the bins at Wal-Mart.

One other factor strongly in Krall's favor: The $15 list price - and frequent discounting by a few dollars - making this cheaper and longer than most new CD releases.

Krall's singing is always in top professional form on a collection of songs split between standards and originals, but never really turns up the heat (although there is a suitably playful mood on Tom Waits' "Temptation"?). Her live Nat King Cole-influenced piano almost always exceeds her studio work and that holds true here, mostly on well-embellished passages staying safely inside the framework of the compositions.

Robert hurst delivers more comfort than innovation on bass, but does a solid job of doing so. Drummer Peter Erksine, on the other hand, is something of a neutral presence, not really engaging or distracting listeners from the rest of the ensemble.

Sound quality is decent, but extras on the disc are minimal with a lone video being the only substantial offering. That's not a serious problem given the DVD's low price, especially since the concert audio is spliced together smoothly and — if one ignores the hyperactive cameras — can be thought of a value- oriented extended album.

Track listing: Sometimes I Just Freak Out; All Or Nothing At All; Stop This World; The Girl In The Other Room; Abandoned Masquerade; I'm Coming Through; Temptation; East Of The Sun (And West Of The Moon); Devil May Care; Black Crow; Narrow Daylight; Love Me Like A Man; Departure Boy

Visit Diana Krall on the web.