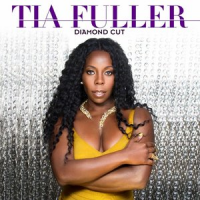 The engaging and enjoyable Diamond Cut is saxophonist Tia Fuller's fifth release as a leader and the first without a pianist. Fuller deftly fronts a different rhythm section on each half of the album. The only constant is guitarist Adam Rogers, whose restless, explorative style is the perfect foil for Fuller's ardent, poetic wit.

On the opening "In the Trenches" Fuller embellishes the breezy, mellifluous theme with gusto and passion. Rogers follows with a cool, muscular swagger that echoes the leader's creative spontaneity while his crystalline, dark phrases contrast with Fuller's vibrant and warm tones. Drummer Bill Stewart and bassist James Genus conclude with a thunderous and visceral conversation.

On the stimulating "Queen Intuition" Fuller alternates performing fragments of the melody with bassist Dave Holland over an understated rhythmic framework that drummer Jack DeJohnette creates. Fuller launches into a tense and thrillingly complex improvisation that seamlessly returns to the head that serves as a launchpad for Rogers' perfectly complementary solo.

Two guest artists, drummer Terri Lyne Carrington, on percussion, and organist Sam Yahel, make one of the highlights of this album, "The Coming," even more memorable. The former's rumbling beats and the latter's otherworldly chords contribute to a dramatic ambience. Fuller fills it with understated virtuosity and fiery abandon. Carrington closes on an exciting note with her up-tempo, percolating vamps.

Another gem is the tender and emotive duet "Tears of Santa Barbara." Holland switches between melancholic con-arco lines and eloquent pizzicato. Fuller responds with a brilliant extemporization filled with wistful lyricism. The result is a haunting and poignant piece.

If there are breaks in the recording's cohesiveness it is not because of rotating roster of backing musicians. These rare spots where momentum slacks are on pop leaning material like the R&B-ish "Save Your Love for Me." With Yahel's organ adding a smooth groove this romantic piece is effervescent and sweet. Fuller unfurls a luscious saxophone song over the band's languid refrains. She manages to make it charming and fun as she eschews the saccharine.

Diamond Cut heralds a new stage in Fuller's already stellar career. With a new group and varying material, she firmly establishes herself as a unique voice in the mainstream while cautiously trying out fresh ideas.

The Trenches; Save Your Love For Me; I Love You; Queen Intuition; Joe’n Around; Crowns Of Grey; The Coming; Soul Eyes; Delight; Fury Of Da’Mond; Tears Of Santa Barbara; Joe’n Around (Alternate Take).