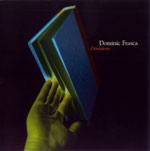 While the center/left jazz world has been celebrating Charlie Hunter and his eight-string bass guitar wizardry, Dominic Frasca has been quietly amassing frightening technique on a ten-string guitar (a Martin classical converted by Thomas Humphrey). If you're counting strings in the altered guitar universe, Frasca has the edge. He also plays an acoustic instrument, allowing a range of timbral color and providing all kinds of opportunities for built-in percussion.

Now that the guitar nerds are paying full attention, the most amazing thing about this solo debut isn't Frasca's impossible dexterity on his instrument, but the music he has chosen to play. These seven pieces include original material plus compositions by Marc Mellits and Philip Glass ("Two Pages"), all coming from the same sort of bridge between trance and lush minimalism that Frasca explored on Steve Reich's "Electric Guitar Phase" (Nonesuch, 2001).

The brief opening self-paean "Dometude" makes a dramatic entry with insistent pulses, rapid-fire cascades, and faint whiffs of melody, all wrapped together in an incredibly detailed web of notes. While Frasca does occasionally employ electronics for live processing, he does not (repeat: does not) make use of overdubbing or loops. Now sit back and play that piece again, and you'll be able to see past the repetition and properly appreciate the way the musical plates shift tectonically, crashing and morphing into each other.

During the pieces that follow, Frasca builds like a sculptor, assembling towering, interlocking patterns that constantly permute over time. He plays really interesting percussion on the extended "Forced Entry," where the opening pulse comes right out of audible human breaths. The eighteen-minute Glass piece toward the end of the recording is particularly lush and reverberant.

Music with this kind of crystalline energy is not suitable for most audiences, mainly because most people don't want to actually listen to their music. But that shouldn't stop anyone with open ears from tuning into this solo recital of whispery, piercing intensity. Especially recommended for guitarists and fans of neo-minimalism in the hands of other Cantaloupe artists and groups like The Necks.

Note: this version of Deviations is different from the 2004 title of the same name on Quicksilver Records, which featured mostly the same pieces; it also has better distribution and proper cover art.