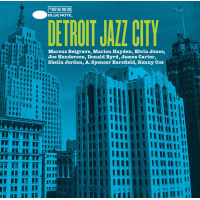 Blue Note president Don Was is a metro Detroit native. He grew up exposed to the rich musical legacy of the city, as well as to the economic struggles of many of the city's residents. This celebrates both. As the press release states, "All proceeds from the album will be donated to Focus: HOPE to aid in their on-going pursuit of intelligent and practical solutions to the problems of hunger, economic disparity, inadequate education, and racial divisiveness in Southeastern Michigan." Certainly a noble endeavor. And just as certainly a pretty fair representation of the city's jazz history. Given that the city's history is rife with legendary figures, most of whom, it seems, recorded for Blue Note, it must have been an enjoyable endeavor for Was to search through the vaults for these gems —and each is, indeed, a gem, whether from the past or newer pieces recorded by Was.

The program opens with first-call bassist Marion Hayden, perhaps best known as a founding member of the all-female Straight Ahead, with Regina Carter. Here, she is joined by Mike Jellick (piano), Sean Dobbins (drums), the amazing Rayce Biggs (trumpet), Vincent Bowens (tenor saxophone), and Cassisus Richmond (alto saxophone) on ""The Uncrowned King,"" a song written by pianist Kenny Cox. Following a breath-quiet piano, the bass introduces the theme, on which all involved contribute. A searing tenor is followed by stratospheric trumpet lines. ""You"" is a 1968 Kenny Cox piece on which the criminally under-heard pianist is joined by the cream of the local crop in that year—Charles Moore (trumpet), Leon Henderson (tenor), Ron Brooks (bass) and Danny Spencer (drums). Cox had a tone similar to Bill Evans and the voicing of the horns is delicious.

James Carter and cohorts turn in a brilliant take on Rahsaan Roland Kirk's ""Many Blessings."" Carter plays soprano and is joined by Hayden, Jellick and Dobbins on a sprite romp. Jellick is especially inventive. Carter is incapable of not being impressive and is so here, swingin' and growlin.' Oldsters in town will remember James as a teenage phenomenon. That he has grown to worldwide standing is a matter of local pride.

Joe Henderson called Detroit home as a young man. He moved to New York in the 60s exodus that saw so many of the city's creative force migrate. This 1966 take on Cedar Walton's ""Mode For Joe"" teams the tenor giant with Lee Morgan (trumpet), Curtis Fuller (also a Detroiter on trombone), Ron Carter (a Detroiter on bass), and Joe Chambers (drums). This is a classic Blue Note recording that stands the test of time. It is still a gorgeous tune that showcases the blowing of the horns, especially that of Henderson. Fuller's invention and Morgan's powerhouse chops are jaw-droppingly impressive.

Marcus Belgrave was the patriarch of the jazz community from the late 60s, when he came off the road with Ray Charles, until his passing in early 2015. Joined here by Hayden, Bill Meyer (piano) Gayelynn McKinney (drums) and Vincent Bowens (flute), Marcus plays a pensive and inventive flugelhorn on the beautiful ""Lottie The Body's Mood. "" Lottie was a locally celebrated jazz dancer who was well known in the 1940s. Meyer's piano is gorgeous and soaring.

Elvin Jones, the youngest of the three Pontiac brothers, with Hank and Thad, performs on the 1968 ""Reza."" Here the legendary drummer is joined by the great Joe Farrell (tenor) and Detroiter Jimmy Garrison (bass). Jones was playing with John Coltrane at around the same time and his propulsiveness is in evidence throughout. Farrell was a product of the times, as well. He is as quick-witted and rhythmic as Elvin.

A. Spencer Barefield is an extraordinarily talented guitarist who has been a major figure locally since at least the late 1970s. A master of the instrument his quick fingering is his calling card. He is joined by Marion Hayden and Sean Dobbins on his ""Ghost Dance."" Trio work does not get any better, Donald Byrd's ""French Spice,""from his 1961 Free Form album, is prime post-bop Donald Byrd. His work with Wayne Shorter (tenor saxophone), Herbie Hancock (piano), Butch Warren (bass) and Billy Higgins (drums) on this well —known classic still exercises the inner ears. Shorter and Hancock are amazing, as is Mr. Byrd. The closer, ""Sheila's Blues,"" is a recitation of Sheila Jordan's early days in Detroit and is accented by Hayden, Jellick and Dobbins. You don't have to be a Detroiter to appreciate this album, or a fan of straight ahead jazz. Great music transcends labels. This is a Great album!