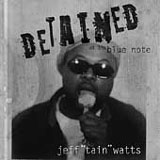 On Detained at the Blue Note , Jeff "Tain" Watts' first live outing as a leader, the effusive drummer lets loose with one of the most unrestrained performances he's ever released. Watts' uninhibited style of drumming is best heard in the intimate club setting in which this disc was recorded. The outgoing Tain is inspired by the interaction with a live audience and the listeners respond in kind as the music escalates in intensity, delivering climax after climax to their roaring approval.

Opening with Bjork's "107 Steps," the quintet featuring saxophonist Marcus Strickland, pianist Dave Kikoski, guitarist David Gilmour and bassist Eric Revis engage in a liberated dance on the Latinish line, driven relentlessly by the leader's inexorable rhythms. The date's other four tracks reinvent Watts' compositions from his earlier studio dates. "JC Is The Man" from Bar Talk is appropriately a dedication to a former Zinc Bar mixologist (Jean Claude) and not John Coltrane, although the music is most certainly, like most of Watts' compositions, Trane influenced. The group bookends the song with a good-humored vocal chorus; in between they settle into a groove with Gilmore's guitar and Kikoski's keyboards setting a more Milesian mode.

Watts introduces the "powerful and soulful" Kenny Garrett, who joins the band for "Mr. JJ," raising the excitement level another point with a passionate Coltrane-Sanders inspired solo that culminates in an electrifying duet with the explosive Watts. Strickland holds his own on tenor, once again proving that he is the leading up-and-coming saxophonist on the scene today. Citizen Tain's "Sigmund Groid" receives a thorough treatment on a nineteen-minute examination of Watts' thoughtful melody, featuring a searing extended solo by Garrett.

The closing "Like The Rose," a moving ballad by Watts, begins with a beautiful bluesy piano prelude from Kikoski that introduces the leader's vocal recitation of his lyrics, which are almost Shakespearean in their romanticism. Garrett and Gilmore get downright funky on the body of the tune, gamboling joyously over a Tain backbeat that spirals into a whirlwind that drives Gilmore's guitar and Kikoski's keyboards into a frolicking frenzy before returning to the tune's tender words.

Few live dates succeed on the level of this one. Watts' ability to capture the hearts and souls of listeners with music that remains uncompromising in its creativity is a shining example to all who aspire to reach a wider audience without sacrificing their integrity.