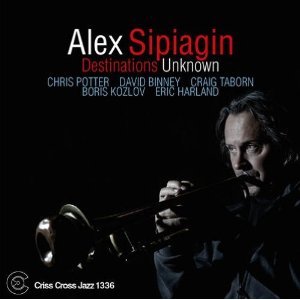 Life on the road can often wear musicians down, but it can also inspire them to great heights. Trumpeter Alex Sipiagin's travels took him to Taiwan, Spain, Italy, France, Japan and Holland in the months preceding the recording session for this album in January, 2011 and each one of those locales helped to stir his creative impulses. This gripping session of heart-pounding jazz, which possesses the edge and attitude delivered by New York modernists, is the end result of a compositional process that began in each one of those distant places, and Sipiagin's sojourns in foreign lands helped to produce what may very well be his most bracing music yet.

The three-horn frontline from the trumpeters' Equilibrium (Criss Cross, 2009), featuring alto saxophonist David Binney and tenor saxophonist Chris Potter, is reunited here, and sparks fly frequently. When all three men collide, they craft snaking lines that weave and bob in vibrant fashion ("Videlles"), but it only takes two to tango, as demonstrated by Potter and Binney on Sipiagin's "Fast Forward." Both saxophonists take pleasure in giving one another a near-simultaneous tongue-lashing as their flights of fancy reach fever pitch.

While Sipiagin's shared history with both saxophonists certainly contributes to the frenetic-but-focused sound of the frontline, it's his relationship with the rhythm section that helps to shape the music from the ground up. Bassist Boris Kozlov and Sipiagin have shared more than record dates, with both men having attended the Gnessin Conservatory in Moscow together and rooming together after they came to the United States in the '90s, and Kozlov is completely locked into his longtime friend's musical mindset. His bass riffs help to establish direction in odd-metered surroundings ("Videlles" and "Fermata Scandola") and his hook-up with drummer Eric Harland is palpable.

Harland—who has worked with Sipiagin in bassist Dave Holland's sextet—continues to be the sorcerer of kaleidoscopic groove-tweaking, as he constantly toys with the beat using expansive rhythmic ideals and his stellar technique to serve each song. Craig Taborn's Fender Rhodes often shimmers in a relaxed fashion, in deference to the more heated statements from the horn players, but he cooks—albeit with a slightly lower flame—when it counts ("Fermata Scandola"). When he switches to piano, as on the mystical and propulsive "Fast Forward," his playing takes on a paranoid intensity that fires up the rest of the band.

While the lengthy works on this album prove to be complex labyrinths of time, space and sound, they never lose direction. Sipiagin's trumpet serves as the compass that always points in the right direction, as his band travels to Destinations Unknown.