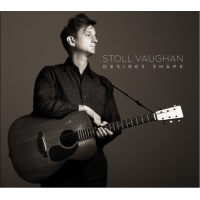 Stoll Vaughan's profile rose appreciably when he was credited with —and duly lauded for—penning material that appeared on the Allman-Betts Band debut album Down To The River (BMG, 2019). Cryptic as his own album title seems on the surface, there is no lack of clarity in the man's writing nor the spartan production, arrangement and musicianship on Desires Shape. As such, it will not allow but rather transcend glib categorizations such as 'Americana," as well as any facile comparisons to modern icons of poetry-in-song, including but not limited to, Bob Dylan, Neil Young and Jackson Browne.

A less knowing and more pretentious soul than Vaughan might well have subtitled this deceptively stolid effort along the lines of modern day 'songs of innocence and experience.' But in keeping with the somber and borderline drab color scheme of the compact disc digi-pak, the Kentuckian offers no grand gestures or declarations of profundity in songs like "Will of Man" or "Desires of Despair." Rather, he tenders discerning observations, based on his perceptions, that resonate with an underlying conviction so unremitting that to play such compositions accompanied with more than just his guitar, voice, piano and harmonica might stifle their import.

As fully formed as such songs as "Put It Back Together" sound, they don't radiate any air that the authoring came easy. On the contrary, an inordinate amount of meticulous craft would appear to have been applied. Nor are the performances perfectly painless, either, at least on the surface; while there's an unmistakable resolve in Vaughan's voice as he sings, there's also a palpable fragility at its heart; for instance, he is clearly sharing that which is not only deeply personal, but ever-so-carefully worded with the lyrics assiduously married to melodies like that of "Weather In Kentucky." This is the work of an artist with a wisdom beyond his years, a state of grace he no doubt struggled to earn and refuses to take for granted. He is "So Righteous" in fact that he refuses to take sides, preferring to accept respite where he can find it, such as the pleasure in the intricate finger work along the fretboard on the instrumental "Will Of Man."

It is little wonder that, for this fourth album of his, Stoll Vaughan chose to record in the privacy of his own home and co-produce with one other individual, Effie Dozier. With no distractions or interruptions in what he so pointedly chose to compose, sing and play, the conflicting sentiments within a composition such as "Entertained" come forth straight and true, unencumbered by second thoughts or reservations. And, as agonizing as some expressions might sound, like "Set Her Free," there's also a quiet sense of liberation in the communication thereof.

If during Desires Shape, Stoll Vaughan sounds haunted, he is also haunting and to a proportionate degree. The stark intimacy of his creative output here takes the form of a personal statement that might well define a career, that is, if the album didn't also lay the groundwork for expansion and elaboration upon this graphic outline of artistry. The beauty of this record is such that, while its austere package might have included the words to these ten songs, to delineate the verbiage would diminish the mystery by which the wordsmith came to choose them. Likewise, the enigmatic nature of its creation only renders it a more satisfying experience on its own terms even as it presents long-term potential equally or more enticing.

Put it Back Together; Desires of Despair; Weather in Kentucky; Oklahoma; Entertained; So Righteous; Rosie; Will of Man; Set Her Free; Maria.