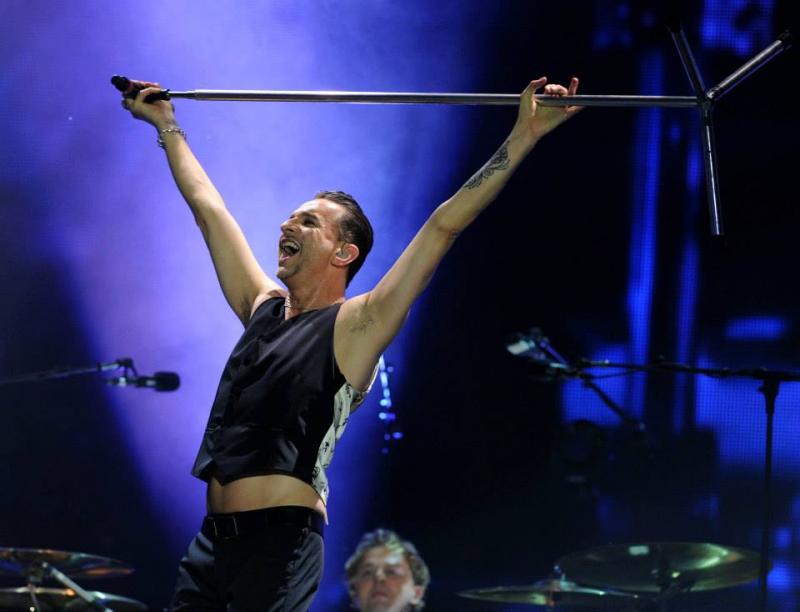 British electro-pop behemoth Depeche Mode is as grand live spectacle as is ever likely to be seen. Over the years the band has achieved enormous success, with millions of records sold and, despite personnel changes and close to being casualties to either a rock lifestyle or severe illness, it has managed to stay on top of its game for nearly three decades. During that time, Depeche Mode has cemented its reputation as a live spectacle, giving the audiences shivers down their spines with songs soaked up in dark sexuality and obsessions.

The band's performance at Ušće was one of the most eagerly anticipated events of the year as, on its previous tour, the date in Belgrade was cancelled and the whole tour was ultimately sacked when singer Dave Gahan fell sick and crashed during the 2009 Athens concert. The group is promoting a new album on this tour, the dark and brooding Delta Machine (Columbia, 2013), filled with songs about mortality, pain and spirituality. The album is soaked up in bluesy vibes and gospel influences, mixed with the group's synthetic pop, but this time is far more influenced by keyboardist/guitarist Martin Gore's project with on- time Depeche Mode member, singer/multi-instrumentalist Vince Clarke.

The concert kicked off with the maniacal "Welcome to My World," a suitable opener, but from the very start it indicated a problem that hindered most of the show—poor and inadequate sound that hindered enjoying the string of hits that followed, like "Angel," "Walking in my Shoes" and "Precious." The group even took a dive deep into their past catalogue for a "Black Celebration" and the perennial live repertoire piece, "Policy of Truth." The sound was really low, and each time the whole band pounded out a climax it dissolved into sonic blancmange: safe, gloppy, sweetened, sanitized and distant. Now, these are all perfect pop songs, perfectly crafted, but the poor sound and the lifeless stage performance took all of the show's dramatic initiatives and it put distance between music and audience. It felt like watching a VHS video, now that Blu-ray is the standard.

There was a happy incident when the group started its '90s hit, "Barrel of a Gun" twice, due to equipment malfunction and human error, which indicated that it was, indeed, people onstage and not machines that were being turned on by a click. So, somehow the show swam to a safe point where guitarist/keyboardist Martin Gore had a solo spot with two beautiful and quiet ballads, "Only When I Lose Myself" and "When the Body Speaks." From that moment things turned for better as it looked as if the band had woken up. Singer Dave Gahan, who was recognizably lifeless, suddenly woke up and injected new life into the show, jumping his heart out, dancing with his recognizable flamenco-like moves, and communicating with the crowd of 30.000—as it should be when doing a stadium concert. 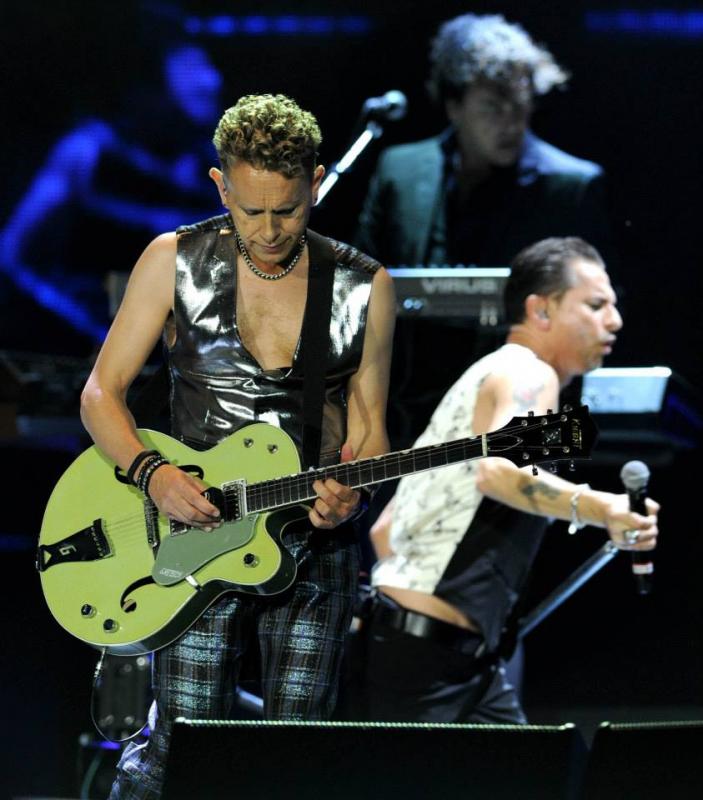 What it lacked during the first hour, the band made up for in spades in the next. Despite not being a fan of Delta Machine—it shows a band of enormous size endlessly reconfiguring and recycling its own beats, grooves, darkish melodies and textures in a way that lacks freshness and innovation—during the second part of the show the band sounded livelier. With more songs featured from that album, including "Heaven," "Secret to The End" and, especially, "Soothe my Soul," Depeche Mode was firing on all cylinders, sounding better than on the record. What followed was a string of band's greatest hits which drove the show to a climax—"Enjoy the Silence" and "Personal Jesus"—and that is where the band shone the brightest.

The stirring "Home" promised a strong finale, followed by songs and crowd movers such as the playful and funky "Just Can't Get Enough," the dramatic "I Feel You" and the work of a genius, the closing "Never Let Me Down." This encore proved to be a very satisfying moment in a performance that should have been crafted and executed better for a band the size, popularity and draw of Depeche Mode. Credit must be given to drummer Christian Eigner, whose consistency throughout helped the show from dissolving completely, and made the band shine when necessary.

Sound flaws aside, while the set list was full of great songs, it was also filled with sudden and inadequate uplifting tunes and downers—both in mood and tempo—and it was more suitable for an arena than an open air show like that at Ušće, a location where major rock acts of that size, like The Rolling Stones, Metallica and The Police, have performed when in Belgrade.