BY BRUCE LINDSAY
September 28, 2011
Sign in to view read count 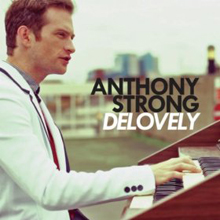 From beat one of this genuinely swinging recording, London-based singer-pianist Anthony Strong and his band nail just the right groove to grab the attention and get heads nodding and toes tapping. Delovely—his second recording, following 2009's self-released Guaranteed!—is a five-song mini-album of mainstream standards, distinguished by Strong's warm and romantic vocal and some fine musicianship from his fellow players.

Strong's background includes study at the Guildhall School of Music, work with a diverse array of artists including Michael Bolton, and playing the role of Jerry Lee Lewis in the West End cast of Million Dollar Quartet. He makes good use of these experiences, combining musical skill with an ability to deliver an emphatic performance.

"It's Delovely" and "Cheek To Cheek" are given up-tempo arrangements. They may not be the most romantic versions ever recorded, but they are certainly among the most upbeat, the most resolutely positive—after all, the guy's in love, so why shouldn't he be feeling pretty good about it? Both songs feature fine vocals and piano from Strong, clearly a talent as a singer and a musician.

The pace slows a little on "For Once In My Life," which gets a slightly funky rhythm courtesy of bassist Tom Farmer and drummer Chris Preece, and some nicely understated guitar from Billy Adamson. Rather strangely, for much of this song, Strong sounds uncannily like pop legend Sir Cliff Richard. "Tea For Two" starts off slow, Preece's slinky brushwork steering its shuffle rhythm with style. Strong invests all four of these classic songs with energy and honesty, and his excellent fellow musicians give punchy, involving performances.

Strong gets a co-writer credit with Guy Mathers on the lightly-swinging waltz-time "Going Nowhere." With something of a '40s musical romance about it, it's slightly old-fashioned, perhaps, but the result is a sweetly engaging performance.

Delovely entertains. It's Fun, with a capital F, and at just over 15 minutes it doesn't outstay its welcome—in fact, it ends all too soon.

It's Delovely; Tea For Two; Cheek To Cheek; For Once In My Life; Going Nowhere.