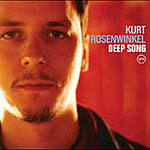 Three new originals lead off: "The Cloister," a slow waltz with one of Rosenwinkel's dark and spectral unison melodies; "Brooklyn Sometimes," anchored by an infectious bass loop with a nu-jazz lilt; and "The Cross," a bright triple-meter piece that marks Ballard's first appearance (he's the nimble percussionist to Jackson's hard-charging swinger).

Rosenwinkel also includes three previously recorded tunes. "Synthetics" is a touch faster than before and features a vicious Redman solo; "Use of Light" begins with an irenic Mehldau solo instead of guitar atmospherics; and "The Next Step," originally played by Rosenwinkel on piano, has a bluesy, almost Blakey-esque impact this time, thanks largely to Ali Jackson. Redman overdubs two counterlines on the aching Billie Holiday vehicle "Deep Song," the disc's shortest cut.

Guitar-wise, Rosenwinkel's tone and vocabulary grow ever more distinctive. He continues to mic his voice and sing most of what he plays—a sonic trademark that permeates the entire session, from the slow musings of the standard "If I Should Lose You" to the liquid lines of "Gesture (Lester)" and the elaborate, Gershwin-inspired "Cake."