BY JOHN KELMAN
November 9, 2007
Sign in to view read count 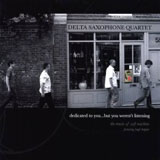 The legacy of Soft Machine continues to be felt to this day through alumni-related projects including Soft Bounds, Soft Mountain and Soft Machine Legacy. But it's the Delta Saxophone Quartet's Dedicated to You...But You Weren't Listening—The Music of Soft Machine that may be the most revelational...and revolutionary look at a legendary British group that ran the gamut from post-Dadaist psychedelia to free jazz and fusion between 1966 and 1981.

Those familiar with Soft Machine can draw a tenuous thread through its fifteen-year run. DSQ brings that line—regardless of period, context or composer—into sharp focus, with arrangements of material as early as the title track, from Volume Two (Probe, 1969), and as late as "Aubade" and "The Tale of Taliesin," from Softs (Harvest, 1976).

That the two Karl Jenkins tracks from Softs have a pastoral British feel is no surprise, given his post-Softs Ademus projects. But it's the beauty DSQ find in bassist Hugh Hopper's material—long considered more idiosyncratic and oblique—that proves the most unexpected. "Facelift," with a guest appearance by the bassist, remains a quirky, episodic piece, also featuring tenor saxophonist Tim Holmes and soprano saxophonist Graeme Blevins.

"Somehow with the Passage of Time...Kings and Queens 33 Years Later," on the other hand, refashions this equally abstruse tune from 4 (CBS, 1971) into rich contemporary classicism—at least until its midpoint, when Hopper's signature figure drives altoist Pete Whyman's visceral solo. "Everything is You" is dramatic yet beautiful, while "Noisette," pushed forward by propulsive baritone saxophonist Chris Caldwell, would work equally well with a small chamber orchestra.

That half the material chosen is Hopper's—with three by Jenkins and only one track referencing keyboardist Mike Ratledge and drummer/vocalist Robert Wyatt—might seem surprising to Soft Machine fans. But DSQ's combination of innovative commissioned arrangements and greater spontaneity suggest that Hopper's compositional contributions to Soft Machine may have been unfairly overshadowed. Even the three freely improvised tracks—"Dedicated," "To" and "You," find Hopper as their base inspiration.

While much of Dedicated is acoustic, processing figures strongly on the three improvised tracks, linking DSQ with its plugged-in inspiration. All four saxophonists mesh seamlessly as an ensemble while, at the same time, demonstrating plenty of individuality. Perhaps it doesn't seem so strange, after all, to hear the music of Soft Machine reworked for a largely classical repertory saxophone quartet. It's just one more example of how stylistic boundaries are being dissolved, and proof that the best material can be re-imagined into any context.