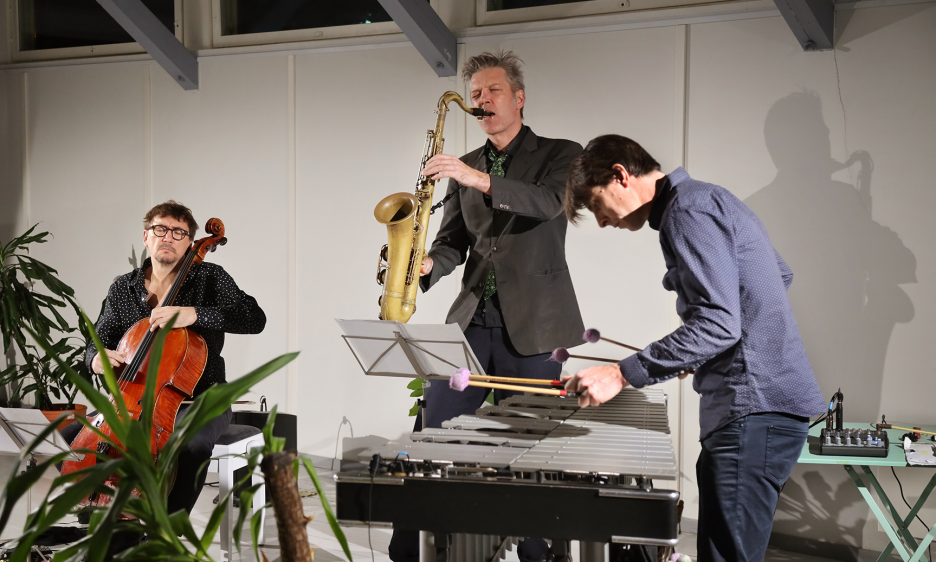 The reality of the first evening's streamed concert was what you would expect, and maybe a little more so. Without a live audience it was a stark show, much in the minimalistic style of Finnish film director Aki Kaurismäki. This trio was on the last gig of its 8-concert Nordic tour, at their most bonded and integrated, and their performance was tight and fluid. Most of the material was familiar from the 2019 release on BMC Won't Put No Flag Out though the atmosphere that night in the old beach cafe Paviljonki was surprisingly tense.

Without an audience too much banter between the musicians would maybe feel self-indulgent, but in this instance it would have brought some light relief. That said, the music on offer was exciting, with three potential lead instrumentalists working their briefs with flair and energy. With Vincent Courtois subbing regular third member, violin and viola maestro Théo Ceccaldi, the band's musical palette was less extreme than it can be. As a mid-range instrument the cello is sonicly less extreme, though in Courtois' hands it can leap and cavort as wildly as any gipsy fiddler, but seated center stage his playing was more measured than is expected from Ceccaldi. Jim Hart on vibes, and leader Erdmann soloed and accompanied fluidly and tastefully throughout the single set.

When local saxophonist Mikko Innanen joined the line up, there was immediately on offer a looser framework and more fireworks—a noted element of Innanen's own repertoire. His additional baritone and alto accompaniment also added both a direct foil to Erdmann's tenor and a dynamic contrast that was missing from the trio. Bigger shouldn't be better, but it is inevitably broader.

There was a very contrasting style the following night at the Nordic Jazz Comets concert, if an evening streamed from 5 different venues does qualify as a single concert. This is a yearly event, sponsored by the non-profit jazz organizations of the 5 Nordic countries, held on a rotating basis around the region. This year's program was coordinated from Finland in conjunction with We Jazz (whose own December Festival had to be canceled) and was streamed from each local venue. Consequently it had more of a club atmosphere with differing decor and set up. Each band obviously had their own style too, and the musicians seemed very much at ease, relishing showcasing their skills.

The program started early in the evening with the Svaneborg Kardyb, an experimental drums-and-keyboard, Enoesque duo from Denmark. Then Swedish avantgardist Post-sun-vision Trio played a mellow and melodic set, contrasting with their successors the Icelandic electric bassist Ingibjörg Turchi leading her quintet in a highly electronicized, trancey set of tunes. The Norwegian, piano led Kjetil Mulelid Trio, followed with a varied and interesting selection, and the evening closed with Estonian-born singer Kadi Vija and her Finnish band accompanying her in a series of pieces of wordless vocalese. All but the first set are currently available for viewing on YouTube. At times of seasonal darkness and threatening worldwide sickness, what a relief to have such varied and inviting distractions from a range of talented musicians!