By Ian Patterson
April 5, 2007
Sign in to view read count 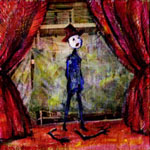 An acoustic bass, an acoustic drum and clarinet may bring to mind the small combos of Benny Goodman or Buddy DeFranco, but when you add guitarist Nels Cline to the equation (armed with his box of electronics to boot) then you can be sure that the cat will go tearing out of the room. Indeed, from the beginning of "The Stars of Stage, Screen and Radiology, with its anguished, animal-like screeches from clarinet and the rapid, angular guitar lines, it is clear that there will be no half measures on Debut, bassist Anthony Shadduck's first release as leader.

The electronics on "Half & Half & Half sound like someone is hopelessly trying to tune in to a radio frequency in outer space and picking up some wild, honking reed which tries to force its way through the electronic interference. Once the reception is clear, and Lynn Johnson has wrung every strange noise from her clarinet in vampiric fashion, Shadduck, Cline and drummer Ches Smith conduct themselves as an orthodox trio. Cline takes a meandering, idiosyncratic solo as the song winds down slowly and gracefully.

"The Girl with the Sky-Blue Tears follows on almost seamlessly from "Half & Half & Half like a logical coda. Shadduck's gentle bass and Smith's crying cymbal gradually build towards a slightly harsher aesthetic. Throughout the album, Shadduck's soft approach to his instrument contrasts starkly with the explosions of high intensity, free-playing around him.

The shifts in mood, the tension built and then dismantled, and the layers of sound which push and pull at each other characterize the entire album but are best heard on "Mr. Lima's Sad News. The song grabs you and shakes you until your teeth rattle. Cline steers it tantalizingly into bluesy territory before the song mutates once again, Smith's tireless drumming leading the barrage of sound which gradually peters out; the calm after the storm.

If you think you recognize the pattern by now, "Styrofoam Audience demonstrates that there is little that is predictable about Debut. This brooding number has a slightly otherworldly feel. Each musician dips a tentative toe into the improvisational waters, the ripples all connect, but the expected collective plunge never comes.

Anthony Shadduck's quartet successfully maintains the tension and excitement of traversing the high wire without ever falling into the abyss of over-exuberance and excess which often mars the best intentions of improvised-music makers. This is fearless experimental music, brash and unapologetic improvisation.

The Stars of Stage, Screen and Radiology; Half & Half & Half; The Girl with the Sky Blue Eyes; Mr. Lima's Sad news; Styrofoam Audience.