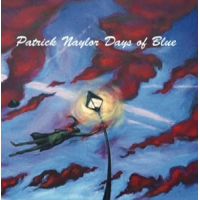 "Baba" opens this album by British guitarist Patrick Naylor, with a middle eastern-tinged sax melody embellished with fast, acrobatic interplay between guitar and sax. Vocalist Stephanie O'Brien guests on the exquisitely executed song "Naggar" with elegant cello from Natalie Rozario, and this is all underpinned by graceful accordion from Daniel Teper.

On "Rifferama" Naylor's quiet yet confident approach to his instrument is apparent. He's not short of technique, allowing himself just enough flowing runs to demonstrate his chops. The title track, sung by Sara Mitra, is the sort of song that in an ideal world would top the charts, but is ironically just too tasteful and subtle. It opens with almost imperceptibly quiet triangle and majestic cello from Natalie Rozario who gives a magnificent solo too.

"Blue Morning" is a lengthy slinky bluesy workout, with a head arrangement and interspersed with a jam-like feel. "Waiting" is a quiet waltz with brushed snare drum and a resonant double bass solo from Alex Keen. The opening guitar work on "Restless" is most redolent of the under sung and under-recorded guitarist Amancio D'Silva, of Hum Dono fame, whose sensitive, almost gentle playing Naylor seems often to invoke.

A sax and guitar duet opens "Lost Song," arranged as a quartet piece with bass and drums. "After Dark" sees Naylor on acoustic guitar and Ian East playing the melody line. The short solo by Naylor here is reminiscent of John Abercrombie in feel and the piece is augmented by deft percussion and piano.

The final track "Vamp" offers a more extended yet restrained fuzz guitar solo from Naylor, who shows he is more than equal to the challenge of well-crafted and dextrous finger work.

Naylor's unique selling point is that despite his undoubted technical ability and imaginative delivery he doesn't use the guitar as a weapon; his band is guitar-led but not guitar-dominated and this is the crucial difference. His talent, as with Miles Davis, is to push other soloists forward into the limelight. However, when he does solo, Naylor acquits himself with flying colours. This excellent album, mostly written by Naylor but with some of the other musicians too, stays with the listener long after it's finished.